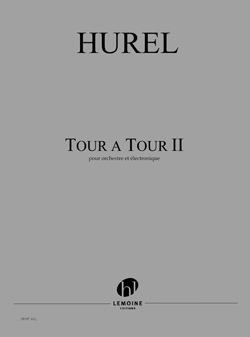 The cycle Tour à tour, approximately an hour long, includes Tour à Tour I (premiered by the Oslo Philharmonic in 2008), Tour à Tour II (commissioned by the Philharmonic Orchestra of Radio France and Ircam, premiered in 2015), Præludium (premiered by the Cottus Philharmonic Orchestra in 2010) and Tour à tour III (premiered at Printemps des Arts by the Monte Carlo Philharmonic Orchestra in 2012).
The composition of this cycle is characterised by a return to my preoccupation with timbre and spectral fusion. As a matter of fact, after several attempts at rehabilitating "melody" and lines in my music, this orchestral cycle is more distinctive due to my working on sonic fusion and sound synthesis. In Tour à tour, I return to one of my youthful preoccupations, the search for ambiguity between the perception of timbre and that of lines. This cycle also seems to be a sort of concerto for orchestra in which the various sections of the orchestra become, one after another, depending on the context, the protagonists of the "drama" that is taking place.
In Tour à tour II, la rose des vents, the electronics become part of the action to open the orchestra's overly restricted stereophonic space. Having the recordings from sections I and III available, allowed me to process the orchestral sounds in a studio and create a sort of imitation live electronics. The electronics are triggered by a keyboard (played by a musician on the celesta). To this processing of pre-existing material from the other sections, I added intrusions by small instrumental groups (cf concerto for orchestra):
In section 2: 3 clarinets, 3 flutes, strings, flutes and oboe, brass which, while successively playing short varied excerpts of the “waves” from Tour à tour I (openmusic), are processed electronically to emerge from the orchestral fusion.
In section 3: the group bass drum/tam tam/woodblock/piano in the extreme low register punctuates each sub-section.
In section 4: percussion/piano then low strings/trombones, in a rhythmical exchange that disrupts the long merging textures.
Purely electronic sequences are added to these various processes (again the idea of a concerto) and have two functions: that of a musical breath in the midst of very dense material, but also a physical breath for the musicians who really need a moment of rest in the middle of the cycle.
All of the sound material from this section converges toward an extremely high texture out of which emerges the note E-6, played by a crotale. This crotale sound is the beginning of Praeludium, a short prelude to Tour à tour III.
Beyond the rigorously formal construction using limited material, this cycle is characterised by my on-going desire, to leave room in my works for greater expressivity, reflecting a real influence of the Germanic orchestral repertoire. Nevertheless, we find my predilection for "spectral" work, and a preoccupation that runs through all of my music, the interplay with the listener's memory structured from repetition, reiteration, looping and variation.