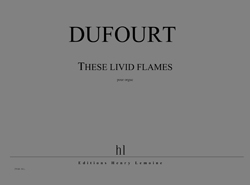 These livid flames is a collective commission from Musik an St. Martin in Kassel (Germany), the Stichting International Orgelconcours (the Netherlands), the Orgelpark Amsterdam (the Netherlands) and Toulouse les Orgues (France). The work has also received support from the Fondation Francis et Mica Salabert.
The commissions were joined together by Bernhard Haas, dedicatee of the piece, who will give the premiere performances. The "registration" of the piece was done on the Trinity Church organ in Paris, where Olivier Messiaen was the official organist.
The composer and organist Thomas Lacôte generously helped me complete this version of the work. Bernhard Haas kindly offered to do a final reading, making new propositions of how to adapt the piece for modern organ. I extend my profound gratitude to both of them.
The title of the piece, These livid flames is drawn from John Milton, Paradise Lost, Book I, verse 182:

Perhaps hath spent his shafts, and ceases now
To bellow through the vast and boundless Deep.
Let us not slip th' occasion, whether scorn,
Or satiate fury yield it from our Foe.
Seest thou yon dreary Plain, forlorn and wilde, [180]
The seat of desolation, voyd of light,
Save what the glimmering of these livid flames
Casts pale and dreadful? Thither let us tend
From off the tossing of these fiery waves,
There rest, if any rest can harbour there, [185]

Milton's father, a merchant and devout Anglican, played the organ and composed religious music. For Milton, the organ was, from the start, the most essential instrument, capable of transporting thought toward the infinite, of making an invisible presence known, of evoking the rumbling of the different hells, their "general hissing", or summoning the sublime harmony of celestial choirs. The organ also processes the terrible privilege of being able to express losing the sensation of self, the threat of annihilation (loss of being), assimilable with the fall.
Satan having just been flung out of heaven into the fathomless abyss, discovers the extensive dispersal of the chaotic regions. "No light but rather darkness visible." (I, 63). Only visible darkness emanates from these livid flames.
Paradise Lost is the story of evil, in the manner of the Book of Job or the Divine Comedy. Evil makes itself known through strange apparitions, a pernicious suavity followed by blasphemous parodies, twisted retorts or sterile imitations, and finishes in perversion and monstrosity. The bad will stumbles, rallies, perseveres and collapse into itself, in an inexorable and retrograde blindness. It leads the sinister exodus of hardened hearts.
To translate this moment of loss and collapse, no need to take inventory of the most recent innovations of organ technique. A reflection on the essence of the instrument seemed preferable to me. In fact, for me, the very system of registration seems to condense, in its essence, the most difficult paradoxes of occidental metaphysics.