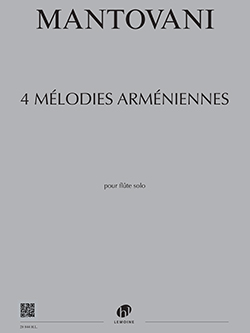 Armenia is an exceptional source for singers and instrumentalists specialised in classical repertoire. It is also a country where traditional music is particularly developed and expressive. The emblematic instrument of popular repertoire is the "doudouk", a double reed instrument like the oboe, but with a beguiling timbre closer to that of the cello. The transition from sound to breath, and the inflexions during the passage from one note to another (through micro-tonality) constitute singular elements of tone colour. Music for the doudouk can also be both rhythmical (part of the Armenian repertoire is based on using ostinati) and extremely lyrical.
When I started to write this flute piece for the ARD competition, I thought that it would be interesting to "alter" the western instrument, attempting, through the use of specific techniques, to give it an Armenian colour. Furthermore, I drew several musical ideas from the country's repertoire (notably inspired by the playing of the great virtuoso, Araïk Bartikian). These Quatre mélodies are not at all a transcription of Armenian pieces, because, for example, the language is not modal. They are however, a contemporary occidental interpretation of a traditional musical material of infinite richness.