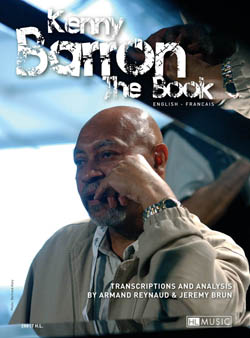 Transcriptions and analysis by Armand Reynaud and Jeremy Brun

I am honored to write a few words about one of the greatest jazz pianists around, Kenny Barron. He has been an important fixture on the New York scene for 40 years and is one of the elite jazz pianists in the world.
I first met Barron at the great piano/bass duo spot, Bradley's, in Greenwich Village in 1977. I had heard him in Cincinnati (my hometown) in 1974 with the Yusef Lateef Quartet and was very impressed. At Bradley's, he was friendly and very encouraging to me, a 21-years old pianist recently arrived in the Big Apple. As time went on, he let me sit in with his bassist, the great Buster Williams - it was a real treat.
When I began making benefit CDs for Classical Action: Performing Arts Against AIDS, in the early 90's, I asked him to participate in the second recording "Fred Hersch and Friends: The Duo Album" by playing a duet with me. This organization raises much-needed funds for AIDS services and education. Kenny eagerly donated his time and played beautifully. He also appears on the follow-up benefit CD, "The Richard Rodgers Centennial Solo Jazz Piano Album".
We have also played two pianos in New York at Town Hall and twice at the Jazz Standard, to my great delight. He is a wonderful and sympathetic partner and willing to try just about anything.
Though it is difficult to pinpoint, and I don't want to put him in any kind of box, I hear his style as mostly influenced by early McCoy Tyner (the long, clear lines) and Tommy Flanagan (phrasing and use of space). He has achieved the rare status of jazz master by virtue of his longevity, his depth and his musicality. Both he and I share a fondness for the music of Monk, Strayhorn and the American Popular Songbook and we are both strong believers in giving back what we have absorbed by teaching and mentoring younger pianists.
In addition, he has a warm and engaging personality - supportive, a great sense of humor and a relaxed attitude. I am so pleased that this book will shed some light on what makes the pianist Kenny Barron tick - I am sure that it will have great musical and historical value for all who follow jazz piano.

PART TWO - TRANSCRIPTIONS OF SOLOS
I - Leader
Transcriptions of solos from Kenny Barron's recordings as leader
Recordings: Oleo (piano solo) - Dig - Maiden Voyage - Softly As In A Morning Sunrise - There Is No Greater Love - Straight No Chaser - In Your Own Sweet Way - The Man I Love - Beautiful Love - Embraceable You - Voyage - On The Sunny Side Of The Street - I'm Getting Sentimental Over You (piano solo) - Invitation - An Afternoon In Paris - Ask Me Now - Minority - Take The Coltrane - Solar - All Of Me - Bye Bye Blackbird - Very Early - Memories Of You (piano solo)
Complete discography as leader and co-leader
II - Sideman
Main collaborations
Dizzy Gillespie - Freddie Hubbard - Yusef Lateef - Ron Carter - Stan Getz - Sphere
Transcriptions of solos from Kenny Barron's recordings as sideman
Recordings: Be Bop - Fly Me To The Moon - Fiesta Mojo - Nardis - Wave - But Not For Me - When You Wish Upon A Star - A Beautiful Friendships - Scrapple From The Apple - There Will Never Be Another You - I Remember You - All The Things You Are - East Of The Sun (piano solo) - You'd Be So Nice To Come Home To - Body And Soul - Summertime - So What - How Deep Is The Ocean - Salt Peanuts - A Night In Tunisia - Confirmation
Complete discography as sideman
Annexe
Kenny Barron's repertory
Kenny Barron's standards
Kenny Barron's compositions
Kenny Barron's biography