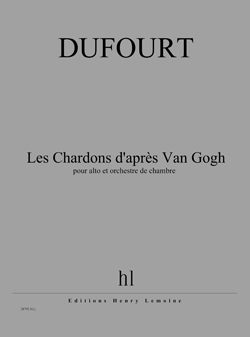 In 1888, Van Gogh wrote: "The painter of the future, is a colourist the likes of which has never existed." At the time, Van Gogh broke away from the impressionists, expanding their intuition of colour and simplifying it. The form-colour is created rather than recreated by our vision. Van Gogh no longer concerned himself with anything other than the energy of the image.
The painter lived in Arles, where Gauguin joined him for a time. He wanted to renovate the very foundations of art, to change the technique of painting. He dreamed of creating an "atelier du Midi" thinking to have found there the ideal Japan, landscapes by Monticelli, by Cézanne, the sun's radiance and the acrid light heralding the future of art. He moulded an original style in some two hundred paintings, among which, Sunflowers (August 1888), Joseph Roulin, the postmaster (August 1888), L'Arlésienne (November 1888) and Thistles, dating from the same year.
Vivid raw tones and bright explosive colours spread stridently with large brush strokes or palette knife, resume the whole expressive register of his art. Blue against yellow, green against red, scarlet, lilac, grey-pink, grey-violet, blue and green, black and yellow: the singular force of the contrasts suffices to define the shape.
Sunflowers, olive trees, stubble, cypress trees, ravines, rocks, thistles, all of these lacerated, distorted motifs, have the spontaneous intensity of an inner torment. Van Gogh deliberately abandoned trying to capture the fleeting instant to represent light, air, or the atmosphere - from then on, the transitory quality of the visual impression was no longer important to him. His canvases are carried by the vehemence of the brush strokes, the brutal deliberateness of the colours, and their convulsive vitality. Despair, lucidity, and rage are the characteristics of an art hailed as the precursor of expressionism.
Thistles shows us the roots of the world, a sort of original inferno from which three flames burst forth. Here, the "landscape's geological conference" - the expression being Cézanne's - seems torn to pieces, consumed by an everlasting blaze. It is an entanglement of sharp edges, of nature broken down, an image of passion and of fury. In the background, to the left, a little slice of blue sky emerges, encased in an elevated horizon of green mountains. The earth, heated white, occupies the entire space. In the foreground, are swarming incandescent streaks that twist and crackle.
Les Chardons d'après Van Gogh - my own musical transposition inspired by the painting from which the title is taken - was written for a solo violist and a fifteen-member chamber ensemble. This piece strives to faithfully reproduce the painting's voiceless vitality, its aura of catching fire. It has neither outlines or borders, or, strictly speaking, organisational schemes. I was instead looking for a formal arrangement endowed with a dynamic value, providing the shaping of the "sound mass" with an ambiguous role: lines of power, the impulsion of gestures, the variety of the directional dimensions, tensions within the material, conflicts between the formative principles.
The viola continuously follows the ideal trajectory of an unreal movement - spiralling shapes, volutes, arabesques, but clears a passage through a continually hostile milieu. The choice of the viola timbre highlights the middle register, with contained intensity.
The compositional technique consists of a composition of textures, with the peculiarity of entangled forces and shapes. Perceptible structures emerge from the singular interplay between masses and colours. I obviously stressed the interactive dynamic comprising the sound texture. I sometimes harbour a certain scepticism concerning the scientific and well thought-out methods that are applied to the treatment of acoustical sound properties. The culture of sound cannot, in my opinion, be reduced to the science of sound.
It seems to me that music has in common with painting, the capacity of vesting colour with conflicting qualities. A violet blue can be just as easily assimilated with a purple tending toward blue, as with a blushing blue. Van Gogh defended in particular the idea of a dynamism, and even of an intentionality belonging to colour, capable of being deployed according to the focus and zones of diffusion, by transgressing all limitations.
The music that I hope to write has however, nothing in common with a new form of impressionism. It is drama that I am looking for in the modelling of sound. This drama can be as much that of dispersed structures as of the indefinite amplification of actions, that of the violence of tumultuous masses as that of upward surging or expanding.
The score received a commission from the French government, on the initiative from Daniel Kawka and the Ensemble Orchestral Contemporain.