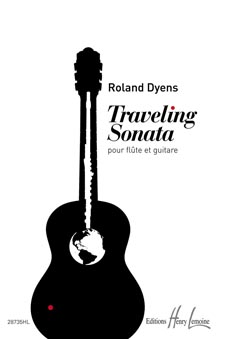 Traveling Sonata was composed, as one might guess from the title, in moments of wandering throughout my travels (in 2007). Each of the three movements that compose this piece are named after cities in the world that are more or less famous: Bellinzona is the administrative center of Italian Switzerland (also called Tessin or Ticino) - Mottola is a small Italian city in the province of Taranto in the region of Bari, administrative center of Puglia (Puglie) - and finally, Ankara is, as everyone knows, the capital of Turkey.
Three people have contributed, in indirect ways, to the coming into being of this work: Jean-Louis Jolivet, while Artistic Director of Editions Henry Lemoine, with his support in the publication of my first "official" composition for flute and guitar, Larry Rawdon (American dealer of string instruments and cellist) as he suggested that I write for the duo that would become the commission agent-dedicatee of the work, lastly, Yannick Le Goff, my old road companion and flute player,whose expertise and eye of a lynx led me to believe that I could write properly for his instrument. I wish that all three receive my warm gratitude in equal share.