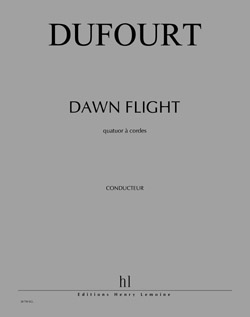 Dawn Flight is the title of a painting that the British painter and engraver Stanley William Hayter (1901-1988) painted in 1959. His scientific training - chemistry, geology - and his mathematical skill were considerable assets for his research into materials and colours that could move into fluorescent ranges.
Hayter, who was one of the essential figures of the surrealist movement, committed himself to the abstract path in New York, along with Pollock, Rothko, Baziotes, Matta, Motherwell, De Kooning, Riopelle. He is recognised as being the person who revolutionized engraving techniques during the 20th century. He invented the procedure that allowed several colours to be obtained on the same plate in a single passage. Returning to Paris in 1950, he experimented with new engraving techniques: imprints, the use of acid on metal and above all the multiple tip burin. He did research on the materialization of shapes, transparency, interference, vibration, and mottled effects. His paintings intensify colour and gestured dynamism, finally being devoted to capturing the play of light on the surface of water. Dawn Flight is built on a range of divergent obliques, rising along the diagonal, thus illustrating the paradox of an ascending flux being drawn into the upper regions. The stretched and elongated shape of the streaks, the intimate torsion of the texture and the paradoxical tension of the interlace give the impression of an elementary reality, the dawn of a world. Hayter's works from that period - Perseïdes, Poissons volants, Vague, Ixion, Cascade, Mérou, Méduse, Night - reveal strange associations of blue and black, of orange, transparent yellow, blue and of green.
Frank Stella and Donald Judd are among the artists who most radically challenged the idea of a formative process of art, rejecting the very idea of an interior necessity, indeed of formal composition. Transparency, depth, thickness, and radiance were only artificial categories drawn from an illusion of interiority and the very idea of structured progression was only the effect of tyranny from within. How could this apply to the quartet, the construction par excellence of interiority, the very example of a compositional logic refined and reduced to the essential form of a development? Is it still possible to write a quartet following Donald Judd? Because it is not enough to be confronted with the history of a genre, but with the question of its feasibility. Does the very idea of dynamism between voices still have meaning? And that of a whole of which the parts are interdependent? We no longer dare to speak of texture, because it is once again an internal form, the expression of an interior cohesion. Writing a quartet could signify returning to a reflection on the fundamental forms of movement - such as attraction, repulsion, inclusion or penetration. Or further, on what might be meant by gestures like breaking, cutting, tearing, or splitting.
This implies revisiting what is an interference of fluctuations, plasticity, or the opposite of unorganized tension. Without doing away with the quartet, it must be acknowledged that it resembles cloth, an uninterrupted continuity, an interlace of threads and that it relates to a human undertaking par excellence: to write a quartet is to re-tie the thread. To wrinkle, wring, unfold, unfurl, unroll, such are the essential particularities of the quartet, sometimes described as silky or shimmering.
Judd and his contemporaries have invalidated the idea that a work be able to formulate and follow explicit rules, insuring the preservation of a form through a certain series of transformations. From that perspective, musical thought would then return to a state of instability, of perpetual shifting. However, it could perhaps then uncover new schemas of connection, granting a novel meaning to the idea of directed procedures by giving it the form of an all encompassing and unique destiny, without repetition. Recently written music both incites the emergence of novel characteristics and becomes assimilated into the superior reality that it incites: it is not so much a question of imagining the potential as it is the articulation of moments experienced. Returning to Hayter, this would mean concentrating on a concrete topology of intervals and slurs, thinking of the music as a flux, modulation, perpetual emergence, unlocalizable light, an expanding or spinning, yet ungraspable mass. These are several good reasons to write a quartet.