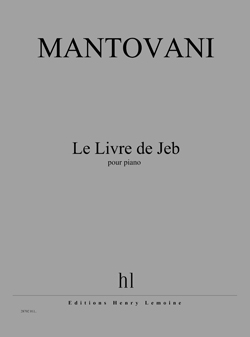 Le livre de Jeb is not a direct reference to the Old Testament, as the title might lead one to believe! The piece is a portrait of the dedicatee, pianist Jean-Efflam Bavouzet, whose initials are the basis of a play on words referring to the Euphrates region. The extended complicity that binds me to this marvelous virtuoso is both musical and friendly. It is in fact these two aspects of our relationship that inspired me: in a musical context, numerous elements emerged from Jean-Efflam's characteristic style of playing. His experience as a percussionist is particularly obvious in a central section where the alternation between both hands allows complex rhythmical figures to emerge. On the contrary, the fabulous crystalline tone that he brings to Debussy's works, prompted me to focus repeatedly on lively, high and airy textures. However Jean-Effram's influence on the score is also related to our friendship and the road that we have travelled together over the years. Once after a concert during which he played my piano quintet Blue girl with red wagon, my friend told me how much he and his wife Andrea were fascinated by a chord heard in the first measures of the piece. Remembering their strong emotional reaction, I decided to use that chord again in the opening of Le Livre de Jeb, a chord with an important formal function, because it will return throughout the piece. The musical material is not in the least abstract, with each of the various musical issues joined to further the homage to a great pianist of our time, and a faithful and generous friend.
Commissioned by the festival "Piano aux Jacobins", Le livre de Jeb was premiered by its dedicatee, in Toulouse on September 8, 2009.