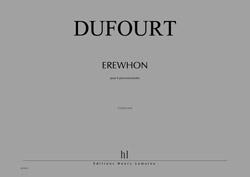 Erewhon I
an image of a world in genesis, of a pure space in action. Jolts, spirals, turbulences, jerks. Shapes become entangled, embedded, or mutually crushed by the pressure of the dynamism that agitates them. The violence of the form strives for the densest possible concentration, for the tightest interweave. It breaks and contracts - a formalism of collision and fracture. Membranophonous percussion is particularly adapted to brutal metamorphoses - freed from pitch constraints, it relates only to the energetic aspect of sound. With a sufficient number of instruments, an actual keyboard of dynamic impulsions is put at our disposal: sharp dry attacks, muted collisions, shocks with colourful resonance, or dull impacts. The rhythm, meter and dynamics are totally dissociated. It is their interweaving that creates the work's tension. The implementation consists of articulating the explosive configurations between themselves, playing more or less on their structural conflicts.

Erewhon II
is a fantastic trial of stereo-dynamics. What would happen to a space that was suddenly saturated with every possible form of energy, as released from the mesh of the universe? Perhaps a world of pure movement without discernable limits would emerge, an upheaval of quavering architectures, the sudden proliferation of a blaze of interferences.
To translate the image of that effervescent complexity, I attempted to construct a changing architecture of metallic timbres (steel plates, cymbals, gongs, tam-tams) where fluidity, ambiguity and indeterminate transitions would prevail.
An interplay of incessant shifts, with the sonic masses' mutual superimposition tending to produce an effect of undetermined flight. The superposition or fluctuation of timbres, alternately emptying and enlarging the sound wave, makes up a rhythmical element.
Another form of scansion: blocks of light implanted within the mass (vibraphones, glockenspiels) rising upward in a radical looming movement. In this work, I attempted to systematically use the specific qualities of metal percussion instruments: modifying the timbre through the attack, slowly transforming the sound's colour by rolling with soft mallets (steel sheets, gongs, tam-tams), using particles of resonance (a cymbal's progressive sparkling), and modulating the resonance's dynamic spectres.
Metal percussion instruments profoundly modify the relationships between sound production and perception. It brings the traditional balance (instrumental or vocal) between articulating movements and the acoustic waves they create into question. This dynamic coefficient typical to metallic resonance must be taken into account, giving rise to a new class of "fluid" sounds.

Erewhon III
an adagio for percussion that treats the instruments like voices: gongs, bells, tubular bells, cowbells, tympani, marimba. In this work, I intentionally took the percussion's overall sound dynamic into account. Striking a gong or scraping a tam-tam means creating a forceful event with a centre (the impact), and a zone of radiation (the radiating signal). Metrical time is completely subordinated to the internal length of the phases of resonance. In addition, the resonance of a metallic instrument produces a form with a shape dictated by a movement of internal expansion. It provides the sound space with a law for development, for curvature, marking it with an evolving speed. The physical properties of the resonance produced by metal instruments outline, in themselves, an expressive geometry. I have attempted to take the best from this alphabet of configurations, fleeting, but clearly differentiated by their spectres of dispersion. Using them requires an organisation specified by laws of affinity or contrast. Lastly, the treatment of the bells and gongs presents a particular harmonic problem: we are confronted by hybrid sounds that are sometimes heard as defined pitches, other times as complex sounds (bundles of harmonic spectres), clear in tessitura, but without an assignable pitch. This explains the ambiguities, oscillations, and transitions between these two distinct systems of sound. Erewhon III is an imaginary landscape, in the manner of Edgar Poe: the distant resurgence of a residual echo.

Erewhon IV
with this work I tried to come ever closer to a borderline situation. What would remain of a language from which speech has been withdrawn, of a discourse without communication? There would doubtless be nothing left, if not the remnants of an abolished world, traces, a breath, a sonic illusion. In this context, I imagined an imperceptible swarming - an extremely tense dynamic state, formed from a hailstorm of dry and incisive attacks on the drum skins. This material is enlivened by very slow swells, with somewhat stressed fluctuations, crossed here and there by diffuse metallic flows. To sculpt volumes tuned to their own pulsation, I drew my inspiration from the techniques of engraving. The art of scoring implies, with highly precise means, how to evoke a background, an elsewhere, to translate the vagueness of an unattached space. A few strokes, a shading of points, are enough to create a play of shadows, a mixture of livid brightness and of sparkling black. More specifically, the spirit of the musical language does not seem to be alien to this graphic economy of means that creates a blur through incising. This is why I have limited myself, in this work, to a composition using particles, more or less contracted, more or less dilated: battuto, rolls, scrapes, resonances.