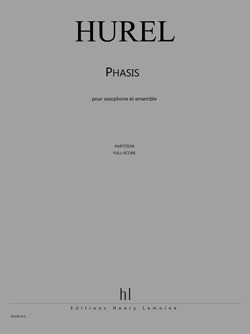 This work belongs to a group of concertante pieces - 4 variations for percussion and ensemble (2000), Aura for piano and orchestra or ensemble (2002-2006), Phonus for flute and orchestra (2004).
In these pieces, the instrumental soloist is always treated as if it were an integral part of the surrounding group, either as part of the "concertino" with the percussion of the ensemble and the piano in the 4 variations influenced by the concerto grosso, or as a sounding entity inseparable from the orchestral envelope in Aura, or as an instrument treated in real time by the two orchestral flutes in Phonus.
In Phasis, I was guided by the acoustical metaphor of phasing. As the piece is composed from recognisable elements - a ceaselessly varied periodic envelope - the unsynchronized writing found in various parts of the ensemble with regards to the soloist, or of certain in relation to others, resembles "delayed phases" between waves, between sound signals.
To this is added the perception of successive states of the same "musical situations" from a different point of view, relating to the appearance of the planets as they become perceptible to our vision during the duration of their revolutions. Here the title Phasis takes on yet another meaning, the etymological meaning that refers to each of the successive aspects of the same phenomenon.
Thus, the same elements are varied endlessly and in a recurrent manner: the melodic envelope that I have already mentioned - that also helps establish the harmonic progressions of the slowest movement - as well as the occasional saxophone multiphonics, analysed by computer and resynthesized by the ensemble in various places during the piece, that act as perceptive markers organizing the form of the piece.
Philippe Hurel