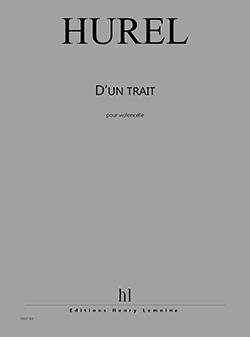 Having played the violin as a child, I had always postponed composing for solo string instruments, as if the fear of coming to terms with my instrument would loom up again once I began to write. Friendship, however, works wonders, and Alexis Descharmes had no difficulty convincing me to write for the cello. It should be mentioned that our collaboration in the context of ensemble Court-circuit only heightened my inclination to confront his instrument.
After a series of Loops, soloist pieces for flute(s) and percussion centered on the idea of looping, morphing and a structural labyrinth, this new piece for a solo instrument takes a totally different, even contradictory, direction. There is thus, no linear transformation process, no strict repetition or looping, no intentional confusion, no rejection of extended techniques or instrumental gestures. On the contrary, the piece is constructed from several "energizing" elements particularly well suited to the cello, and related to the impetuous character of the dedicatee, that are linked, launched and transformed in unforeseeable ways.
In addition, as its title implies, D'un trait was composed in a restricted and concentrated timeframe with a certain underlying "animality", a sort of urgency and tension also present in other pieces that I have written recently, despite using a computer to calculate numerous parameters.
To paraphrase Gérard Grisey, "music situates itself between numbers and drama, between frenzy and structure".

Philippe Hurel
Translated from the French by Jacqueline Rose