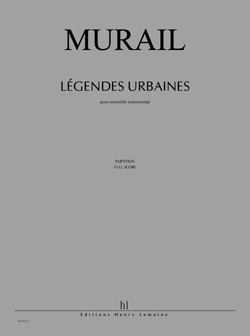 (Take the various meanings of "legend" and "urban" and try out all of the combinations)
Légendes urbaines arose from a specific commission by the Ensemble intercontemporain for a "theme" concert integrated into a thematic season. The themes were: the city, travel, and more precisely for this concert, New York - New York is obviously not a travel destination for me, but rather a frequent "commute" from my semi-rural residence. Literary or visual themes in music have caused much ink to flow and left more than one baffled. Can music express or tell? Is it possible to bring the symphonic poem back to life, to continue writing operas? If so, is this legitimate, or is doing so not definitively obsolete? Since I believe in an experimental approach, I decided to rise to the occasion and make an attempt at the proposed subject, though not without keeping a certain ironical distance from the exercise. It was also a chance to research several models, not depriving myself of more or less transparent references to several of my predecessors to the new continent. The formal structure is that of Pictures at an Exhibition, with suites of musical illustrations intertwined with promenades - musical references that can be fun to guess - the visual allusions, starting points or destinations of the musical reverie, will not be the Empire State Building, the Statue of Liberty and other postcards formatted for tourists, but rather the images and sensations provoked by frequenting a city both familiar and completely foreign.

Promenade 1
Mussorgsky's "promenades" progress at both a martial and sprightly pace... In Manhattan, distances are enormous, which prompts taking the "Subway" with its famous infernal metallic din. As a precaution for our eardrums, it will be heard from fairly far away, accompanied by brass calls, most often in the form of descending thirds - 5 types of thirds made possible by writing in quarter tones. Further, the metallic din and brass calls are not confined to making up the fundamental elements of the "promenades", but infiltrate the hidden recesses of the entire piece.

Staten Island Ferry
For travellers in the past, the "skyline" of Manhattan suddenly rose above the horizon, the object of every hope and every dream at the end of a long sea voyage. The ship entered the New York harbour, greeted the Statue of Liberty in passing, and docked directly at the foot of the "high-rises". Old films and archive shots come to mind. New York is no longer reached by sea and that aspect of the American dream has thus disappeared, but the experience can be relived, to a certain extent, by taking the Staten Island ferry. On the return trip, you can imagine yourself leaning on the guardrail of an ocean liner, discovering the long awaited city... the view is splendid, and the ferry free of charge - something rare in this country.

Central Park at Twilight
Superimposition of different music coming from different places, and moving at different speeds. The strange sensation of briefly escaping from the reality of the city with its noises becoming somewhat muffled. The ambiguous moments of dusk, fleeting and eternal, rustling in the already darkened thickets (it is only squirrels), the silhouettes of skyscrapers lighting up one by one through the foliage. The harmonic song of a "Swainson's thrush". The last strollers hurrying toward the exits: it is no longer advisable to stay and listen to the sounds of "Central Park in the Dark".

Sunday Joggers
Still in Central Park: Sunday, settled near one of the roads that cross the park, which, when closed to traffic, are taken over by a labouring, perspiring and hobbling crowd. "Joggers" of all ages, sexes, sizes, colours and shapes - all speeds, gaits and getups. Some push their offspring along in racing perambulators (3 oversized wheels, aerodynamic lines), others struggle to keep up with their dog(s). Several cheaters go by on bicycles or roller skates. An entire panting humanity passes before your eyes, and you would have to be Daumier (a 19th century French cartoonist) to seize the spectacle - this is the pretext of a modest etude on superimposed tempi.

Whirlwinds
The map of Manhattan is interesting: systematically rectangular, but with several striking irregularities, in particular those caused by Broadway, the remains of an old Indian path, cutting diagonally through streets and avenues that has produced several architectural and topographical extravagances. Another consequence of the urban planning - or lack thereof - is that the atmospheric flow has become quite strongly disrupted. Some intersections are now the site of formidable gusty whirlwinds, in particular the complex intersections caused by the intrusion of Broadway into the urban checkerboard, or the climatically terrifying intersection between Riverside and 122nd street, where the presence of a neo-pre-Raphaelite bell tower skyscraper greatly disrupts the masses of air moving along the Hudson river.

Promenade 2
More agitated than Promenade 1, and leading to the following triptych:

George Washington Bridge 2
"Not only will a sound's harmonic potential be revealed in all of its splendour, but also the use of certain types of interference created by partials will be highly influential. We can imagine the use, unthinkable until now, of lower combination tones, difference and sum tones. A totally new sonic magic!" (Edgar Varèse, excerpt from a conference given in Santa Fe in 1936).

George Washington Bridge is our Great Gate of Kiev - and one of the few access routes to the island of Manhattan (we sometimes forget that Manhattan is an island). A "Great Gate" made out of old iron and in constant repair, but that in its time was a symbol of modernity and was said to have fascinated Edgar Varèse, who would come and observe how the construction progressed. It was also the opportunity to make an internal triptych respecting the structure's symmetry, with its two pillars of silver metal, its double-deck where sumptuous views of the skyline can be enjoyed, and all of this spanning a river that sometimes freezes during winter. Lastly, it is an homage to Varèse's prophetic intuition, as shown by the quote above which very precisely describes the types of harmonies developed forty years later by so called "spectral" techniques - though he was not able to put these ideas into practice himself.

Promenade 3
In slow motion, and segueing into:

Promenade 4
A reminiscence of promenade 1, then a return to Central Park as it is engulfed by the night - the Swainson's thrush's last song...