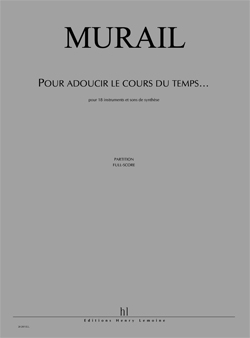 "I write for myself, for a few friends, and to ease the passing of time." (José-Luis Borges)

This is a piece that heavily focuses on time: time that passes, time that is unavoidable, time that circles back on itself, time that is transformed by our consciousness. The piece also focuses on the invisible boundary between those sounds we, incorrectly, label "noise" and those we grant the status of "musical sound".

Several categories of musical objects come and go, are transformed, become entangled: an enormous inhaling (coloured by the filtered resonance of a gong) - the coloured resonances of the same gong - a microtonal melodic contour - a melody of chords (or timbres depending on one's preference, or hearing) - various noisy, breathy, grainy sounds - whose internal structures have been re-tuned - a cow-bell, like the irregular ticking of a relativistic clock.

Underlying: a slow spectral drift towards ever darker and more compressed colors - a progression of 31 sections that grow ever shorter and more active until we reach a central electronic "cadenza", then the sections start growing longer and longer until the end.

The "noises" (breath, grainy sounds, metallic resonances) of the piece have been domesticated, tuned to instrumental harmonies through the use of a specific technique for altering the internal components of the sounds. This is how the sound of a gong can become a harmony, or the virtual cow-bells can be constantly varied and altered by their musical context.

The synthesized sounds are triggered from an onstage MIDI keyboard - they are mixed and spatialized in real-time by the program Holophon developed by the GMEM.

Thanks to Laurent Pottier (GMEM) for his help in creating the algorithms needed to implement the techniques for altering the internal make up of the sounds and with the spatialization of the piece's electronic sounds. Thanks also to Michael Klingbeil (Columbia University) who gave me the possibility of using the earliest versions of his analysis/re-synthesis program SPEAR, which was used to create many of the sounds heard in the piece.