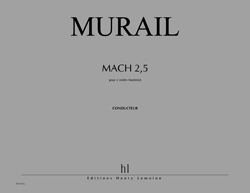 The Ondes Martenot was not highly respected at the time Mach 2,5 was composed. It was generally regarded dubiously or with condescension, as if it were only appropriate for somewhat "old fashioned" music, or to provide film score sound effects.
This point of view now seems a bit ludicrous, considering to what extent electronic sound has evolved. Writing methods of the fifties and sixties have now vanished, and with them the inability to perceive new sonic realities - electronics, computer sounds, but also new instrumental sounds - irreducible in the classical definition of sound by "parameters".
In retrospect, Mach 2,5 remains particularly interesting to me as initial evidence of a new attitude toward sound: the Ondes Martenot is now accepted as what it is, meaning a sophisticated generator of electronic sounds, and not as a substitute for a voice or saxophone, or as a source of Hollywood-style sounds. Subsequently, my fascination expanded to include all electronic instruments and systems of synthesis as they were created, and continues through to today's extraordinary developments.
Mach 2,5 was written rather quickly after a period of research on the instrument. This allowed the music to flow very naturally from characteristics particular to the Ondes Martenot taken to their extremes: phenomena of resonance, false polyphonies provoked by using extremely fast trills and beating. The piece is basically played on the keyboard, and includes none of the melodic "ribbon" effects dear to Messiaen. The extreme speed that is possible on the keyboard, combined with the use of resonant loudspeakers, allows the instrument, even though is monophonic, to create masses of moving sound, and it is this haze of sounds that creates the piece's structure: an impression of speed within immobility.