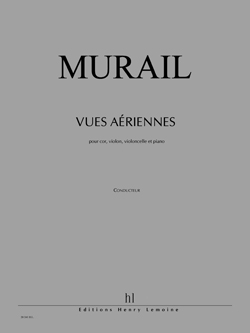 Vues aériennes, commissioned by the Arts Council of Great Britain for the Nash Ensemble, and first performed by it in the Queen Elizabeth Hall in December 1986. The notion of "process" common to so much of Murail's work is here extended: we have a single process presented not once, but in four different versions. Murail compares this to Monet's Cathedral de Rouen paintings, in which the same object is seen from many different viewpoints and in different lightings. There are four "sections" in the pieces, the third being the "original" process, the other three more or less extreme distortions of it: Murail's description runs:

Each of the four sections has three parts, a moment of waiting and anticipation, a central climax and a concluding decay. The hors plays only occasionally, mainly in the central parts of the sections: it starts offstage left, and gradually moves across the stage during the piece, ending offstage right - a parallel to the various angles of the sun upon the landscape. As in much of Murail's recent works, the smallest scale of processing tends to be abbreviated and implied rather than stated in full, and as in Allégories, the result is a skillfull mixture of the predictable and unpredictable. One might note that there is less use of purely harmonic spectra and purely regular rhythm than before, although both the rhythm and the harmony create strong implications of stability. The work has a wider range of expression and mood than much of this composer's work, the different processes of melodic and harmonic distortion creating a direct and highly poetic sequence of moods and textures.