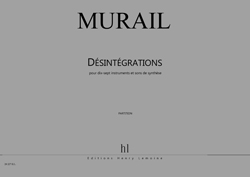 The electronic sections of this work were produced at Ircam.
Electronic Music Design: Andrew Gerzso

This piece constitutes perhaps the most thorough and exhaustive work Murail has done to date on the examination of purely instrumental spectra. All the computer-generated spectra are directly modelled on real instrumental sounds. The computer does not however, attempt any direct simulation of the instruments concerned. Rather, it is a question of using certain spectra as structural analogies for the entire pitch content of the work (whether on instruments or tape) and likewise to generate its large-scale forms. This ensures that the computer sounds and those on tape have a common unity which ensures that they maintain an audible organic unity the one with the other - indeed, the extent to witch taped and instrumental sounds fuse and blend throughout the work is unusually consistent, not least given the technology of the time.
The title refers to the technical processes involved - to the desintegration of a timbre into its individual components - sounds melt before us, revealing their interiors before our ears. But it could equally be an allusion (perhaps unconscious) to the constant flux of the music between moments of order and consonance to moments of disorder and noise as the primarily harmonic spectra are disintegrated and deformed into irregular and inharmonic ones. Désintégrations has a clearly evolving, direct form which falls into eleven distinct sections:
I - this section is based upon spectra from two low piano notes (the lowest B-flat and D-flat on the instrument) - spectra culled from these twin spectra alternate irregularly and gradually fuse, producing a large non-harmonic spectrum which pushes the music towards non-harmonic sounds.
II - a succession of waves on tape and ensemble (the basic spectra are derived from string sounds), going from non-harmonic to harmonic, with certain partials highlighted one alter the other by tape and single instruments in the mêlée. The density of the spectra is gradually reduced as the music accelerates, revealing the uppermost partials of various spectra climbing to a high G.
III - dense clouds of high bell-like sonorities, derived from the disintegration of flute and clarinet spectra, descend to reveal their instrumental origin - a harmonic spectrum upon F (with the fundamental missing) evolves through flowing melodic figures on the English horn, highlighting successive components of the spectra - the music drifts towards inharmony.
IV - a violent rupture, with prominent noisy, grainy spectra which are gradually disintegrated into individual impulses through a carefully notated and dramatic ritardando.
V - the music "cadences" into a brassderived harmonic spectrum on C, reiterated again and again by tape and ensemble - with each recurrence, the spectrum is more and more deformed until it desintegrates back into grainy noise.
VI - a restless and discursive section - offering a release of the tension thus far generated, but only a partial one - various figures and textures drift uncertainly across the musical landscape, most prominently a burgeoning trombone arpeggio which suddenly explodes into.
VIl - a toccata for the whole ensemble in regular semiquavers - this is pulled about by sudden accelerandi and ritardandi (as if the music were being stretched and compressed like an elastic band) before a final accelerando catapults the music into the briefest section in the work.
VIII - seven spectra, from harmonic to inharmonic, with extremely irregular durations (like a randomly re-ordered accelerando).
IX - chaotic and irregular ring-modulation spectra descend through the ensemble, eventually settling onto a low harmonic spectrum derived from a trombone E.
X - the same trombone E is subjected to progressive spectral distortion into a bell like inharmonic spectrum, resulting in a slow, steady increase in tension over about two minutes
XI - a long sequence of bell-like spectra of gradually longer durations, apparently non-harmonic but in fact largely derived from the upper harmonics of very low, unheard fundamentals - this is even true of the last sound into which the ensemble is dissolved, a tam-tam-like spectrum on the tape which is actually a purely harmonic spectrum on a low G well below the range of audibility. As often with Murail's endings, there is a suggestion that there could be more music - the processes remain unresolved and seem to suggest quasi-infinite possible extensions.