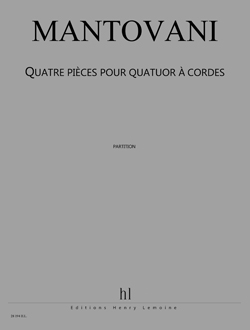 Due to the importance of its rich history and the breadth of its repertoire, the string quartet has, over time, become a mythical ensemble, approached by composers with a mixture of enthusiasm and trepidation. Mozart, Haydn, Beethoven, Schumann, Bartok, Shostakovich, and so many others have written innumerable masterpieces for this instrumental combination that, because it unites intimacy, homogeneity, and virtuosity, makes it suitable for experimentation. Writing for a string quartet today, is a very delicate undertaking, and it was not without apprehension that I decided to confront the genre in 2000. A cycle began to emerge during that period, a cycle that remained unfinished in 2005.

Bleu (2002) is a short lively piece, exploiting an unusual seating arrangement for the musicians (they face each other). From surges to echo games, this movement is built on a "democratic" conception of the ensemble; the musical material being based more on a coherent flow than on the hierarchy between soloist and accompanists.

Les fées (2004, world premiere): in this case a real scherzo, leaving considerable latitude to a procedural writing process. I recently became interested in this aspect of writing (with Le cycle des gris for baroque orchestra, or with Da Roma for trio), as a means of getting away from a conception of language systematically based on the confrontation between contrasting ideas. The progressive transformation from one element to another is the guiding principle, whereas the musical material undergoes processes of accumulation or depletion.

L'ivresse (2003) is in this case, a strongly contrasting, arid and virtuosic music for a dance performance. The discourse revolves around several easily identifiable ideas (high register unisons, rhythmical unison...). In the midst of this ocean of uncertainty and unpredictability, a more procedural sequence sets up an unceasingly energetic continuity, which gives the material an even more abrupt character.

BWV 1007 (2001): chronologically the first piece of the cycle, this movement is a tribute to the First Suite for cello by Johann Sebastian Bach. The model remains present, but is constantly contorted and expanded, to the extent that it becomes almost unrecognisable. Here, the quartet is treated in a more orchestral manner, not with regards to the sound mass, but in the hierarchies, with each instrument alternatively taking on the soloist's role.

Regardless of the unremitting presence of the great historical models in my mind, I tried to retain a certain spontaneity in my writing. The discourse developed through intuition, not through predetermination. The material prevailed over the craft, being expressed despite myself, in an almost autonomous manner.