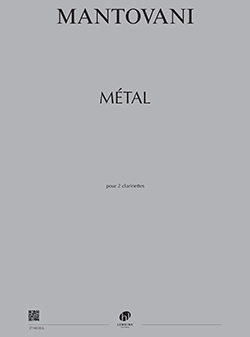 METAL takes its title from the names of its two performers and dedicatees, Paul MEyer and Michel PorTAL. This brief divertissement for two clarinets is for the most part homorhythmic, so that contrapuntal passages in which different or complementary musical ideas are superimposed are rare. This exclusively monodic music alternates echoes between the instruments with perfect synchronism, playing on the dynamic contrasts and the principles of juxtaposition. In addition, the vertical rhythm is a virtuoso element which is particularly perilous for the two performers.
As far as the form of the work is concerned, there are several easily identifiable sections, notably where one of the musicians (who plays the B flat clarinet and bass clarinet in turn) changes instrument.
Although the music is generally discontinuous, certain more lyrical passages allow for a veritable development (on microtonal melodies in relay, for example), or even new procedures (which is unusual in my music). In fact the penultimate section, preceding an energetic coda, is based on the linear transformation of an ostinato rhythm, and on the progressive introduction of other ideas.
The drama of the work is thus determined not by a particular choice of writing to which the musical ideas are subordinate, but by the combination of compositional principles which act as the material.