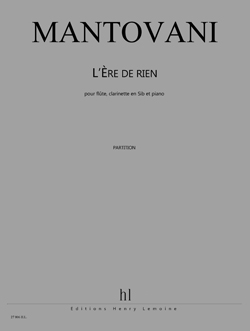 L'ère de rien (the title is a pun in French, its meaning "the era of nothing" being homophonous with an idiomatic French phrase meaning "nonchalantly", "cascually") could be termed an "exotic" work, so much does its musical material take inspiration from extra-European cultures. The micro-tonal ornamentation, middle eastern in character, at the start of the piece, the ritualistic music evoking Asia in the central section, or the Conclusion that makes direct reference to African polyrhythm, become so many clearly identifiable elements as the listener marks out this musical journey across the continents.
The common feature in these different sources is surely the notion of periodicity. Indeed, "loops" (the term "patterns" would be more suitable) are omnipresent, the progressive distortion of these basic ideas underlying the discourse. As elements of contrast, two interludes are given a static character, so as to rejuvenate a texture that is generally based on movement. These "western" episodes usually accord the lion's share to the piano, its function varying throughout the piece (sometimes a soloist, sometimes silent, it is rarely limited to the mere role of accompanist).
L'ère de rien marks therefore the attempt to make some very different, even antagonistic musical styles co-exist, aiming there by to give meaning and coherence to this synthesis of elements. The notion of integration is thus primordial in this work composed in April 2002, a time when certain ideologies based on the rejection of others and on intolerance were tragically gaining ground in France.
Commissioned by the Festival de l'Empéri, L'ère de rien was first performed on 2 August 2002 by Emmanuel Pahud, Paul Meyer and Michel Dalberto.