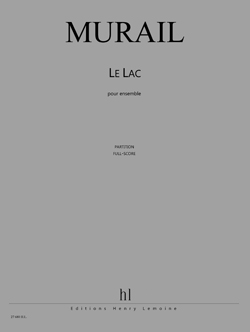 To the north of New York city is a vast region of parks and natural reserves, studded with lakes, hills and forests. I live in a house there, largely open to the outside world, composed of trees, a lake and with life everywhere. Every day, every hour, the lake has a different light, a new mood. It is ever present but ever changing, reflecting and magnifying the incessant movement of the seasons and climates. It is a geometric place for thoughts and looks, a modest symbol of the universe. Like the lake, this piece is built on a few constantly shifting elements: the acoustic analysis of the sound of rain hitting the lake, a stylised rumble of thunder, the call of an unidentified bird, the electronic texture of frogs in spring, and a melody of chords. These elements are treated as abstract musical objects they are modified, filtered, distorted, harmonised or made into chords piled on top of one another they are used for their pure sound and musical value - namely, their psychological impact. This is not an attempt to describe the lake, it is not programme music. What is mainly retained from the natural model before me is the play on permanence and impermanence, movement and mood swings, the logic of the unexpected, and the order and simplicity that nestle within the breast of the chaotic and complex.