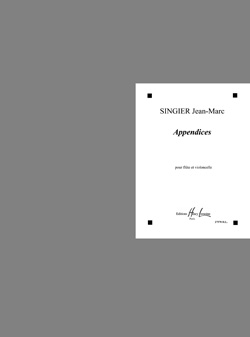 to Marie Veauvy and Alain Meunier

A duet without piano might bring to mind works by Béla Bartok or even Maurice Ravel. Here, the challenge was in the coming together of two instruments with very different characters (the flute, a wind instrument often written for in the upper registers, facing a cello, a stringed instrument of which the register of choice is rather low). It was necessary to adapt the virtuosity of the respective dialogues to the requirements of an organic symbiosis and formal unity.
ln the prelude, I wanted to give the supple appearance of a recitative. Two instruments, that seem to form one single timbre, unravelling a splendid sonorous garland.
In the second part, the dialogues' progression is based on the bracing tangle of elements speciﬁc to each of the duettists (harmonic ornaments and flutter-tonguing for the flute; rhythmic and melodic ﬁgures in contrasting timbres for the cello).