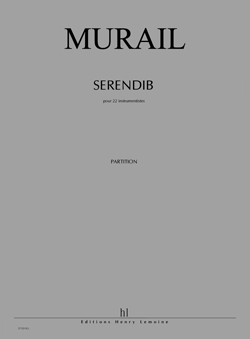 The title evokes the mythical name given by Sindbad the Sailor to the Island of Ceylon, which he discovers by pure accident on one of his voyages. This notion of accidental discovery is matched directly by the elusive forms of the music: the piece does indeed appear to discover its own rules, its own continuities as it proceeds, as if haphazardly stumbling upon them. Horace Walpole's definition of "serendipity" is relevant here: "the faculty of making fortunate and unexpected discoveries by chance". The composer himself has commented that he felt in an analogous position to Sindbad, tossed from one wave to the next, "being thrown, with a bit of luck, onto ever more distant and fantastical shores to discover the imprecise yet imposing architectures of our collective dreams". If Murail's first mature works (Sables, Mémoire/Erosion, Territoires de l'oubli) were characterised above ail by radically extreme continuity of evolution and a devotion to smoothly unfolding processus, then much of his recent music has been characterised by the exact opposite thereof, i.e. broken continuity, fractured processes and outright discontinuity. Serendib is not merely the most discontinuous music on this disc but quite possibly in his entire output to date. This is music of the unexpected, which refuses to settie clown into a stable state and quite unusually, for Murail, almost totally avoids harmonic spectra and regular repetitive rhythms.
The composer says that the music is distantly based on a continuous processes, but that they are used as the basis for almost constant "local disturbances": the music contains multiple "flashbacks", seems to constantly go over the same textures and gestures again and again, each time from a subtly distinct angle and a new point of view: parallels here with the more obvious "cut up" forms of such recent Murail as Vues aériennes and especially Allégories, although the more discursive form of this work demands perhaps the most intensive and concentrated listening of any Murail.
At the root of the whole structure is a sequence of five wave-like elements of different durations which are re-worked, expanded, and compressed to generate all the music - so that these five wave-elements are present at every level, a feature analogous to those exhibited by the so-called "fractal" geometry, in which one sees the same basic shapes recurring at an infinite number of different magnifications. The proportions of the five waves were even used to some extent to generate the large-scale form, although the listener may note that music falls into four distinct sections, not five - the composer took the liberty of telescoping the last two sections into a single one to take into account the listener's psychological perception of the music's evolution through time.
The basic sound world of Serendib is one of the most directly colour the composer has yet imagined. It is dominated by inharmonic spectra orchestrated in brilliant haloes of bell sonorities (the features a large tuned percussion section) with birdsong-like figurations evoked by the multitude of high woodwind figurations - this sparkling sound world is reinforced by the carefully integrated presence of two synthesizers in the ensemble (played by a single performer) evoking a variety of harp and bell sounds in quarter-tone tunings, whilst also providing frequency modulation spectra.