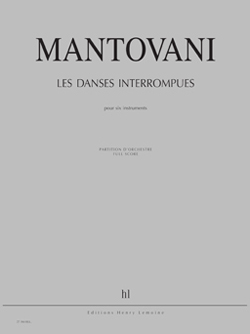 Although Les Danses interrompues may be played as separate entity, they were conceived as a transition between two other works written in 1998 and 1999 respectively, Jazz Connotation and D'un Rêve parti. Inserting the final chord of the first piece (for solo piano) into the opening bars Les Danses interrompues enabled me to introduce some forty minutes gradually into the cycle as a whole. The new work, which is linked to the personality of the musicians of the Alternance ensemble, and in particular their pianist Jay Gottlieb, was inspired by certain types of popular music (such as jazz, techno and even flamenco in the short central section), the references sometimes acting as a foreshadow of the final section of the triptych. The back and forth movement between the material borrowed from the first two pre-existing pieces punctuates the drama, in which development only rarely lakes place. In fact, the music works for the most part on juxtaposition, and the "interruption" (hence the title), the structure as a whole taking its meaning train the recurrent flashes which always appear in different disguises. The piano occupies an important place in the cycle, even outside the first section, so much so that the work could be considered as a vast concerto. But it was not my wish to imprison this piece, with its singular guresis, in the confines of such a well-defined genre, for I wanted rather to present tee listener with this "imaginary ballet" for what it is - a large, rhapsodic, playful divertissement.
Les Danses interrompues were composed at the end of 2000 at the request of Octobre en Normandie, and are dedicated to Frédéric Durieux.