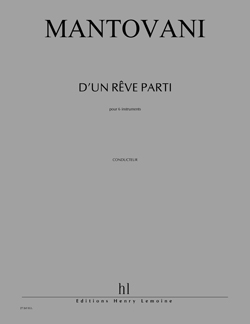 I am often overcome by the need to write playful pieces, in which the musical argument is eccentric, disjointed. These works are often completed in a few days, and then serve as playgrounds for experiments in which I intuitively give my inspiration free rein, without trying to box it in. By incorporating elements taken from the popular repertoire of my 'natural' musical language I can create diversity and underline the extrovert side of the work because of the drama created by the allusions. After Jazz Connotation, which built on the structure of a standard and implied the use of improvisation, and following Grand jeu which used granular sound synthesis with funk rhythm patterns, D'un rêve parti takes its musical material from techno (as hinted at in the title: in French, it sounds like "a rave party"). And yet, the reference becomes explicit only in the second part of the piece. The whole of the first part is involved in setting up the conditions for a coda inspired by synthesisers of the 1970s which are so admired by today's DJs. By opening with a complex and irrational set of superimposed rhythms, the piece manages to create an imbalance which resolves in borrowing from techno (including the regular beat, and the imitation of drum machines with specific styles). So when "music with connotations" appears in the score, it seems to be anecdotal. The reference then becomes formal, since it results from the initial musical idea, and not from other musical material foreign to my style.
D'un rêve parti is dedicated to Jean-Luc Menet.