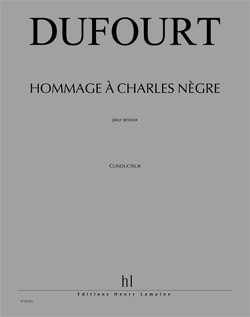 The work was conceived for a film about Charles Nègre, one of France's great 19th century photographers, made by the choreographer and director Daniel Larrieux. The film develops out of a photo by Charles Nègre that shows a family of exhausted chimney sweeps moving along the Quai Bourbon.
The musical work fuses with the quality of this photo, a poignant account of life in the 19th century, as well as a testimony of child labour. Knowing from experience that music must have its own particular rhythm, and that it can only in this way coincide with the rhythm of cinema, I deliberately chose to use a slower rhythm than Larrieux had used to elaborate the film. In addition, I was careful to use very transparent and somewhat ephemeral sound colours, which would absolutely not overstate the features. To respect the impact of the images, the music must recede, thereby not emphasizing anything, and manage to create an atmosphere that is both homogenous and continuously renewed. These requirements had a restrictive impact on my approach to this project. I needed an extremely poignant, sparse harmony - tense sound colours, but with inner tension, lacking in radiance, and completely restrained, I needed timbres that were bipolar, that corresponded to the colour sepia, meaning not too bright and absolutely not brilliant, but not too sombre either, timbres that would shift within a sort of chiaroscuro and constant wavering. The sound palette of the piece oscillates, containing tension enhancers such as the bass flute, oboe d'amore, contrabass clarinet, and bassoon / contrabassoon. To these plaintive elements, I added a sound environment flattering to the winds made from a combination of vibraphone and electric guitar. Even the rhythm must heed a dimension, an unfathomable ambience. Nothing must ever be stressed, leaving the sound space freedom for internal renewal and the possibility of maintaining a certain fluidity, a certain transformation. This is how the musical idea emerged out of the convergence between aesthetic, historic and technical considerations.

Hugues Dufourt,
translated from the French by Jacqueline Rose