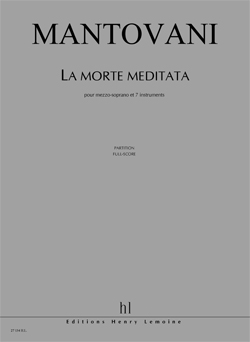 The work was commissioned by Musique Nouvelle en Liberté, and I composed it during my residency at Edenkoben in Germany, from August to September 1999.
Although it uses some of the formal procedures of the Lied, La Morte Meditata does not follow the model slavishly, as can be seen from the lengthy instrumental introduction, which reproduces in condensed form the material to be further developed at a later stage.
Another departure from the style is the voice entry in which the singer uses the first syllable to portray the throes of death, thereby introducing an element of drama that brings the music closer to opera than song. Nor does the listener have to draw on his or her imagination here, for the sound image is quite explicit, and leads the hearer to an extremely sombre, stifling stage setting. But if the listener is led to question the genre of the work from the outset, the clouds soon clear, and the poems are no longer a pretext for action, but rather the starting point for an unceasing musical commentary which makes its appearance almost systematically after each line. The vocal part may be born of a concrete representation of death, but thereafter front stage is occupied by poetic logic.
Ungaretti's cycle is composed of six poems of unequal length. While the second and third can be seen as a unit, representing two different sides of a single argument, all the others are entirely independent and stand alone. There are, however, some words (ombra, morte) which recur throughout the cycle. I decided to ascribe each of these terms a particular musical colour that would be easily identified by the listener, and which would help to reinforce the musical structure as they reappear. In so doing, I wanted to create some strong aural cues which would lend unity to the form, consolidate the structure and enable me to develop the musical argument in total freedom, following my own musico-literary intuition. So although the work opens with an introduction that brings together numerous varying musical ideas, it finishes with these ideas stripped to a minimum. Nothing but a few tail-ends remain from the previous sections, leading to the final knell. Within this directional framework, leading from density to selection, the six poems are based on contrasting musical elements, thus creating a rhapsody form by their very juxtaposition. It is, I feel, in the first one that my own writing is closest to the word itself. The texture is extremely changeable here, and the contrasts flow on in more or less steady stream. In the "Canto secondo", however, the musical argument is quite different, for here the piano leads with a stylised cry above a chord held by the other instruments. The second part of this song introduces a descending theme, associated with the word "morte", on which the overall form of the work hinges. Then in the "Canto terzo" these elements are presented in a simplified, distilled state, with no hint of the airy and varied scherzo to come in the song that follows. Next comes the "canto quinto" featuring the deeper register of the ensemble with the help of three low clarinets, in opposition to the mezzo-soprano singer. Finally the last song combines the various timbres tried out in the previous numbers, while the instruments ornament the vocal line. The instrumental grouping, based on Schoenberg's Suite Op.29, enabled me to create distinctive colours, especially with the use of the numerous different types of clarinet. The orchestration can be said to play a formal role here since some of the songs are characterised by their general timbre, a precise acoustic presence.
To finish, I would like to point out one of the major factors in the genesis of the work, namely that the prime motivation that led me to compose La Morte Meditata was the thought of working with Sylvia Marini and Laurent Cuniot, to whom the work is dedicated, along with my friends in the ensemble TM+. When I wrote the piece I knew exactly who would perform what, and they were all present in my mind while I was at work on the score. It remains only for me to express my gratitude to them for their great inspiration.