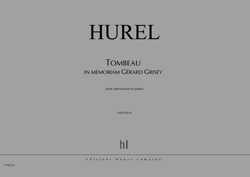 When we retreat and disintegrate are subjective, whereas periods of progress have an objective direction. The whole of the present time is retreating, since it is a subjective "era" or again, "The universal sickness of today is subjectivity" and yet again, "He does not deserve to be called a poet who knows only how to express his own few subjective experiences, a true poet is able to assimilate the entire world and express its thoughts" (Eckermann, Gespräche, 29-01-1826).
Now, if there is one composer who is able to assimilate the entire world and express its thoughts in music, that composer is Gérard Grisey who, like Goethe the botanist, took a genuine interest in science and nature. That evening in Oslo, I was struck by yet another another example of his thoughts, the very long piano solo in Vortex temporum. The rapid juxtaposition of widely differentiated elements, as well as the constraints imposed by the tuning of the piano (four of its notes are deliberately put out of tune), lead to an impressive display of compositional and performing skills. Never had Gérard's music sounded so violent to my ears. Despite the spectacle before my eyes, and the apparently untamed sound of the solo, it was the deliberate gestures that engaged my attention, for it was they that gave rise at every instant to the dramatic tension. When Gérard died, I was working on a piece for piano and vibraphone of a playful nature. The immense grief that suddenly overwhelmed me led me to abandon the project, of which nothing but the instrument names remained. How better could I pay homage to Gérard, other than writing my very own music, with no reference to his, no signs of his influence? Nevertheless, it was the very violence of the Vortex temporum solo that started my piece off. It was imperative not to study the score, and yet to retain its force and use it as a possible metaphor. I had never had to confront this type of work before. The piece took on the appearance of a ritual, and the vibraphone player found himself with extra instruments such as cow bells, Thai gongs, crotals and woodblocks - all to "disturb" the piano without actually putting it out of tune, as Grisey had done. For the first time ever, my music will not be objective. I had great difficulty in evaluating the material, and my momentary yielding to complete intuition might not have pleased the dedicatee. The piece is, however, imbued with Grisey's spirit, and could not have seen the light of day without him. 'In the end we are all part of society, however we look at it. We have but little, count for so little of what we could call our own, in the purest sense of the term. We all of us must accept and learn, both from them who came before us, and from those who are with us now" (Eckermann, Gespräche, 17-2-1832).