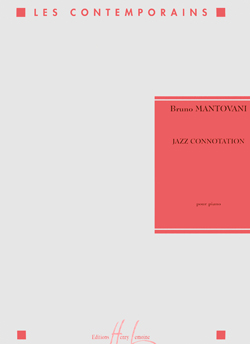 The title of this piano work refers to an Ornette Coleman jazz standard, Blue connotation. At the time of composition, the famous saxophonist had already shaken off the shackles of the rigid chorus-verse system which had hitherto provided lire basis for improvisation, and sought to create a more liberal structure, or free jazz. In Blues Connotation, however. Coleman did not try to surprise the listener with the odd harmonic or formal eccentricity, but paid tribute to a genre that he felt to be outmoded (since it had been very strictly defined for some thirty years and, consequently was no longer a suitable vehicle for personal expression). Coleman also modified the structure of the blues by shortening it and thus turning the theme into a parody. In fact, despite borrowing from a pre-existing form, he remained the master and imposed a radical modification on the piece.
Although I did not want references to jazz to predominate over my own language when composing this piece, several musical ideas did jump straight out of the American repertoire. To begin with, the form is built of seven different sections, thus creating an improvisatory structure (Thema, Chorus no 1, Blues, Chorus no 2, Four / four, Half tine, Turn around). Next. I used elements of typical phrasing, such as moving the expressive accent, remoulding the line and shifting the accompanying chords relative to the main melody. But it is in fact perhaps in its general atmosphere that the piece betrays most jazz influence, and file virtuoso jubilation of Chorus no 2, or the dynamic ruptures inserted into the Thema, are unpredictable playful elements that recall the world of improvisation.
Jazz Connotation is also an autobiographical work, in that jazz has always occupied an important place in my life as a musician, whether as a listener or performer. In any case the idea of improvisation is fundamental for me. Indeed despite the complexity of procedure that I can sel in motion in my work, I try constantly to retain a certain spontaneity, and improvisation is one of those means that I use to achieve that end. To allude to jazz is therefore a fairly natural move for me, as can be seen in several of my pieces such as Round... Quatuor de saxophones and L'Incandescence de la bruine.
Jazz Connotation was commissioned by the festival Aujourd'hier Musiques in Perpignan, and was first performed on 10 November 1998 by Jay Gottlieb, who inspired it and to whom it is dedicated.