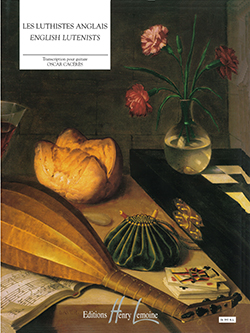 Francis Cutting (fI 1583 - d 1596)
Very little is known of this English lutenist and composer who lived in London and whose compositions are among the earliest published in England for six and seven course lute.
The tune of Greensleeves, on the other hand, is today among the best-known of any Elizabethan song. It was first mentioned in 1580 as a "new Northern Dittye", and as well as the many literary references, there are a few other settings. "Greensleeves" herself has never been successfully identified but, as was the custom at court, she probably unstitched her morning sleeves and set in green ones for evening wear.
The almain (or allemande), fig and galliard were all popular dance forms of the period; the first, with four beats to a bar; was danced in a procession; the second was a livelier affair in triple or compound time; and the galliard was also known as a sinkapace, or cinq pas, because for each measure of six beats the dancer took only five steps.

John Dowland (1563 - 1626)
This greatest of all English lute composers was never actually appointed at the court until he was nearly fïfty, and up to that time he spent many years abroad, first as a "servant" in Paris from 1580-84. He then took a BMus at Christ Church, Oxford, and in 1594, when he was refused a court post in succession to John Johnson after the death of the latter, he travelled to Wolfenbüttel and Kassel, remaining until 1596/7, when he returned only to make yet another unsuccessful application to serve as lutenist to Queen Elizabeth.
While in London - he eventually owned a house in Fetter Lane - he published his First Booke of Songs or Ayres of Foure Partes with Tableture for the Lute. By 1598, however, he was at the court of Christian IV of Denmark and did not return until 1603, and then for 12 months only. Despite his Danish court appointment and the publication of further books of ayres, he fell into financial difficulties, and was dismissed in 1606.
Finally in 1612 he was appointed one of the Kings Lutenists at the court of James I, but ironically, having achieved his life's ambition, he thereafter composed very little.
This edition includes some of his best-known lute music in a variety of styles, including dances, song settings (Can she excuse contains a quotation from another song, The Woods so wild, in the intermediate voices of its final strain), a Lachrimae pavan and a Fancy or fantasia.
Whether Dowland indulged to excess in Elizabethan melancholy, or whether he was tinged with bitterness, some of his music is profoundly, even luxuriously poignant, and his descending four-note teardrop motif the basis of his Lachrimae works, has become symbolic of John Dowland and his famous motto, "Semper Dowland semper dolens".

Antony Holbome (ﬂ 1584?, d 1602)
The lute was the most enduring of the plucked stringed instruments played during this period, but a fair amount of music was also written for its near relations, such as the cittern, for which Antony Holborne wrote 58 pieces, published in The Citharn Schoole of 1597. lt is probable too that he can be identified as the "A.H." who contributed two pieces for the bandora in William Barley's A New Booke of Tabliture published in 1596.
The Galliard in this edition is taken from a manuscript in which Holborne is again identified only by his initials. Another principal compositional genre, the Fantasia, was also much used by lutenists, and in this example four different voice entries stand out clearly at bars 1, 3, 6 and 11, building up into an intricate intertwining polyphony.

John Johnson (ﬂ 1579 - 1594)
This English composer was the father of Robert Johnson, also a successful court lutenist, though little is known of his life. He was probably born in the 1550s and seems to have served a seven-year apprenticeship in a household important enough to maintain a number of musicians on the staff before entering the Queens Musick.
Although none of his lute music was printed in his lifetime, 165 pieces survive today in 32 manuscripts, and his work was very obviously popular with his fellow musicians who did not scruple to use it as a basis for their own compositions.
Carman's Whistle was another popular air of the day with somewhat scurrilous words. Johnson's setting is composed of a theme and four variations.

Robert Johnson (c 1583 - 1633)
Like his father, Robert Johnson was also apprenticed, at the age of thirteen. His training (and the people of influence whom he met) served him well, for in 1604 he was appointed lutenist to King James I, a post he held until his death.
The lute was at this time evolving rapidly, and Robert composed for both the nine-and ten-course Renaissance lute as well as the theorbo, an instrument more associated with the baroque era. Some of the lower bass notes in the two Almans in this edition have therefore been transposed up an octave to ﬁt within the compass of the guitar. The first Alman can be found in the Fitzwilliam Virginal Book in a different version also by Robert Johnson; the title "Hit it and take it" of the second Alman comes from the only printed source of Robert Johnson's lute works, dated well after his death, in 1652.

Francis Pilkington (c 1562? - 1638)
This English composer studied music at Lincoln College, Oxford, taking his BMus in 1595. ln 1602 he was appointed a lay clerk at Chester Cathedral, and twelve years later took holy orders. Despite his numerous curacies he remained a member of the cathedral choir, and his love of singing led him to publish two sets of madrigals as well as a book of four-part songs with lute tablature. On the titlepage of each of these three books he actually described himself as a lutenist, although only ﬁfteen solo pieces for the lute survive, probably all from his earlier years.
The pavan and galliard were two dances often paired together, the first being slow, in common time, and the second presenting a pleasant contrast with its livelier triple measure. The song Goe from my windowe is still wellknown today; two settings were included in the Fitzwilliam Virginal Book, but later versions were often in the minor.

Thomas Robinson (fl 1588 - d 1610)
Despite Robinson's importance today as a composer and theorist we know little of his life. His father was a musician in the employ of the Earl of Salisbury, and Thomas was at some point engaged by his grandson, the Earl of Exeter. For a while he also worked at Elsinore (Denmark), teaching Anne, the future wife of James I.
Robinson is best remembered today for his lute method, The Schoole of Musicke, which was published in 1603, the first wholly English work of its kind, and remarkable for the clarity with which it sets out the principles of lute playing. (A facsimile with a transcription by David Lumsden is published by the Centre National de la Recherche Scientifique, Paris). Also of interest to lutenists and guitarists alike are the details of right-hand technique, for Robinson advocated an increased use of thumb only on the lower courses (where previously a player would have alternated thumb and index, leading to a repetitive tee-dum tee-dum effect); and he advised performers to use the third (annular) finger of the right hand, which was a completely new idea.
All the pieces in this edition come from Robinson's Schoole, and represent some of the main genres of lute composition at the time - the dance form (the Almaigne), the psalm intabulation, and the popular song setting. The tune of Robin is to the greenwood gone was also known as simply Robin, and as Bonny sweet Robin (see the Dowland setting in this edition); the words are no longer extant.

Anonymous
Loth to depart is a ballad tune in the tradition of dawn poems, where the lovers unwillingly separate at the break of day. A number of other settings survive from this period.

Lie still, my dear, why dost thou rise?
The light you see comes from your eyes.
The day breaks not, it is my heart
To think that you and I must part.

Heartsease was another popular tune of the time and this version was also set by Antony Holborne (see above). A different tune of the same name was used by Playford in his English Dancing Master of 1650.

Born in Montevideo (Uruguay), Oscar Cacérès discovered the guitar at the age of 11.
He was making so rapid progress that his teacher presents him, only 18 months after the beginning of his studies, to a recital.
He starts his international career. [...]