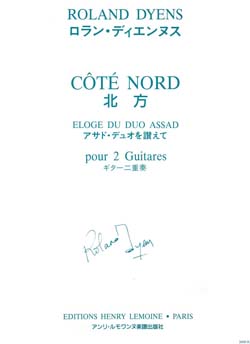 to Sergio and Odaïr Assad

The sole (official) duet of my output was composed in Denmark, long after its elder brother Côté Sud. The unity of place, as the title suggests, was a determining factor and guided my feet - and my pen - in the writing of this piece, which stands to one side in my worklist. Côté Nord oscillates between atonality, bitonality and polyrhythms, and thus takes the listener to a world of colour and timbre, of unreal dialogue between instantaneous and harmonic scordaturas, of lopsided rhythms broken up by burlesque dissonance and the use of the tape. With such a description, it is easy to understand that the two performers, over and above the obvious necessary technique, must also be possessed of genuine broadcasting gifts, not to mention the ability to create a stage production. This work, first performed in Cannes in 1993 (where I had the honour of sharing the stage with my teacher Alberto Ponce), was commissioned by the "Cannes Guitare Passion" festival, and owes its success principally to the Assad duo, to whom it is dedicated, and who shortly afterwards gave its first performance in Denmark, in Hillerod, near Copenhagen.