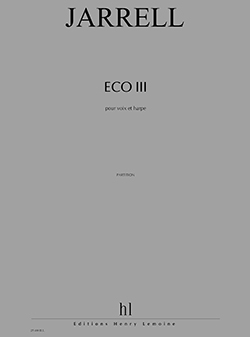 Rather than adopting the well-known practice in certain 16th-century polyphonic music of superimposing temporal planes, this work aims to superimpose or overprint various semantic planes to be found between the text and the music. The echo is not seen as a pure interaction between a set of given words and notes. As might be expected, the music was built up in relation to the poem, but is more of an echo of the words, like a blurred footprint which communes with silence (presence-absence). There are no dramatic gestures, no flights of fancy one is simply left with an impression, an atmosphere which diminishes the relevance of the question, "Is the explicit meaning of words obscured or magnified by the sounds which are made to correspond with it?"
Eco is a setting of Sonnet 80 (1594) by Luis de Gongora.