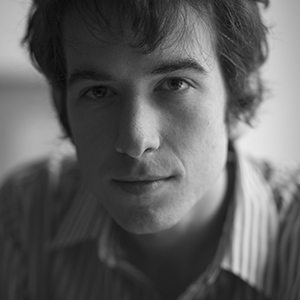 Alex Nante (1992, Buenos Aires, Argentina) is one of the most significant Argentinian composers of his generation. He holds a bachelor's degree in Musical arts, oriented in composition, from the National University of Arts of Argentina (UNA), where he studied composition with Santiago Santero and orchestral conducting with Luis Gorelik. He also studied with composers Marcelo Delgado and Luis Mucillo.

He obtained a Master's degree in Musicology in Université Paris 8 of Saint Denis and a "Prix de perfectionnement" in Reims Conservatoire where he studied with Daniel d'Adamo. He participated in composition workshops, such as "Writing for Vocal Ensemble" of the Britten Pears Programme, with Finnissy and Exaudi, "Noirlac Academy" with Quatuor Diotima, "Composer Seminar" of Lucerne Festival Academy, with Rihm, Van der Aa, Ammann and "Académie Musicale de Villecroze" with Bruno Mantovani. Currently, he is pursuing a Master's degree in composition with Stefano Gervasoni in the Conservatoire National de Paris and participating in the Mentoring Programme of the Peter Eötvös Foundation.

His compositions have been awarded with several prizes, such as the first prize of the contemporary music series of the Teatro Cervantes of Argentina for his piece Aleph (2012), the "Médaille d'or" of the competition "Les Inouïes" of the "Association Musique en Roue Libre" of Arras, France for Quatre pièces pour flûte et piano (2015) and in three first prizes in orchestral composition competitions: "Daegu Contemporary Music Orchestra" in South Korea, for his piece Fulgor (2010), "Guillermo Graetzer" (SADAIC) in Argentina, for Tres Sueños Lúcidos (2013) and "Île de Créations" in France, for La pérégrination vers l'Ouest (2015).

In his compositions, ranging from solo to orchestral music, there persists, on one hand, a nocturnal atmosphere, sometimes dreamlike; on the other hand, an attempt to access a spiritual realm, drawing on sacred traditions. In this sense, the extra-musical plays a fundamental role in his work, especially the relationship with the poetry of East and West mystics. The voice occupies a central place in his pieces, as can be seen in his many pieces with soprano, tenor, baritone and ensemble.

His interest in contemporary music has lead him to co-found in 2010 with Gonzalo Argüello and Juan Miceli the orchestra OANM (Orquesta amigos de la nueva música) which premiered many pieces from argentinian composers. In 2014 he co-founded with Fernando Palomeque the contemporary music ensemble "Écoute", composed by musicians from the Cité Universitaire of Paris.

Alex Nante received the scholarship "Gisela Timmermann" from the Mozarteum Argentino and the Ibermúsicas grant for composers. He is a laureate of Fondation Banque Populaire.