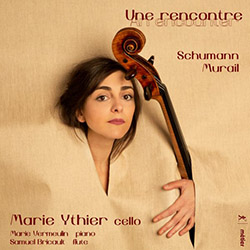 Metier Records, the new-music label of Divine Art Recordings Group, has a fascinating new recording bringing together music by Robert Schumann and Tristan Murail. The album, to be released in June 2019, will be titled Une rencontre ('An encounter') and is a meeting of Romantic and contemporary music, climaxed by the premiere recording of Murail's "revisit" to Schumann's Kinderszenen, a transcription written especially for the cello soloist Marie Ythier.
Marie Ythier is a superb cellist based in Paris who specializes in modern music; her four published recordings to date include Le geste augmenté for solo cello and electronics (Evidence Classics). She is already the dedicatee of a dozen works and has worked with many major composers and conductors She has won several international prizes and is currently Professor of Cello at the CRD Paris Conservatoire as well as giving masterclasses in France, Asia and South America. On this new album she is accompanied by two fine French artists, Samuel Bricault (flute) and Marie Vermeulin (piano).

This intriguing encounter between early Romantic and "spectralist" interleaves Schumann's Fünf Stücke im Volkston and Op. 73 Fantasiestücke, two cello solos by Murail and his engaging Une lettre de Vincent, for flute and cello, culminating in his version of Schumann's Kinderszenen. Odd to retain the instrument that you're transcribing from, but the piano originals are energised and haloed by captivating new timbres.