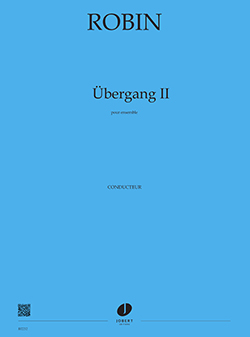 [...] The standout of the program was the final work, Yann Robin's Übergang II. It too employed some tricks - not only in the use of the piano, percussion, and harp but also in the combinations of extended techniques used throughout the ensemble - but what enraptured the audience was the genuineness of its musical gestures and ideas; Robin's writing felt less like an artifact of the potential sounds embodied within an instrumentation, and more an effort to musically approximate something more personal, emotionally complicated, and human. There was a lot of the composer in the work, so to speak, which is often absent in modern music (and perhaps why it can feel alienating to the audience), and the ensemble (too) seemed moved by this connection. The result was a performance equally poised, yet infused with a certain emotional weight that encouraged a bit more risk on the part of the ensemble. That risk combined with the score's intelligent use of textures and careful timing of events to produce an outstanding performance that embodied so much of the tension embedded in the avant-garde; how (or if) to remember the past, how (or if) to proceed in a tradition.

[...] French composer Yann Robin's Übergang II is meant to capture the transitional state between death and liberation of the soul from the body that "The Tibetan Book of the Dead" describes as a sonic procedure, listening being the last sense to go. Thus large mallets hit the strings of the piano and harp. Winds and brass screech like wild animals. Robin convinces us that we should not expect to be wrenched from the physical world without a fight or fright. [...]

[...] It was in the two last pieces: Overheating by Srnka, and Übergang II by Robin that the post-Boulez, influence was strongly felt. Both pieces were dominated by dense tonal structures, strings of notes that slurred and drooped, muted brass exclamations, and overlaid sonorities. Mälkki (a former music director of the Ensemble intercontemporain) conducted them both with deft precision. [...]