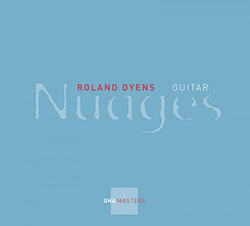 Nuages (clouds) brings together some compositions and personal arrangements - old and recent - recorded here exclusively for the first time. Nothing in particular comes to mind concerning the composer's work. On the other hand, I would like to linger on the art of the arranger, because in my eyes it really is a matter of art. Regarding the word arrangement, I prefer rather the word version, more fitting and better adapted to a piece of work which the artisan necessarily gets involved with in a personal manner (and that has nothing to do with transcription that implies, from the passage of one instrumental formula to another, the integral and true transfer of the musical text).
The wager of the arrangement for the guitar is the restitution of the work's original essence across the space, forcibly restrained, of the six strings of the instrument. It is also a perpetual confrontation with the technical limits of the guitar. That requires on the part of the artisan a fine geographical aquaintance with his instrument, a solid harmonic knowledge and, above all, the concern for being in permanent contact with the spirit of the work. The arranger metamorphosises the limits and weaknesses encountered into so many new qualities, he transformes, he enriches the work in a new light, sometimes unexpected. It is in this step that the art of the arrangement reveals itself.
Nuages is a sincere praise for the flexibility of musical material. I wanted it to be respectful of the guitar andof the composers, of all styles, from which I have borrowed some musical notes. My only desire is that it brings you pleasure.