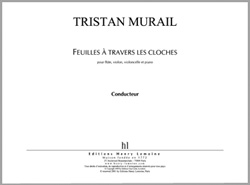 As suggested by the explicit reference to the first piece of volume II of Debussy's Images for piano, Cloches à travers les feuilles, of which it inverts not only the title but also the musical intent, Feuilles à travers les cloches (Leaves through the bells), for flute, violin, cello and piano, is based on the articulation of two planes that are brought to interact on each other. The bells (piano chords, sometimes reinforced by other attacks, systematically combined with the violin pizzicati in relation to microtonal intervals with the piano) and the foliage (sounds in flatterzunge, more diffuse sounds suggesting rustlings), correspond respectively to a foreground and a background whose relationship will be progressively modified. This sound universe in which resonance predominates - the piano is used without dampers - refers directly to the Debussy piano but, more generally, to an aesthetic making Nature a source of ideal inspiration. The lesson according to which "nothing is more musical than a sunset" seems to have been directly heard by Murail. Although this short (ten-page) score has little to do with the intentions of Ethers, it nonetheless takes up certain rhythmic and metric characteristics, as well as the superposition of several strata. The grammar once again seems connected to thinking in musical objects: the chords presented at the outset are limited in number and belong to spectral harmonies even more limited in number. They are recurrent, and form sequences in which the elements are reformulated rhythmically, recombined between the different parts, and give rise to extensions. The manipulation of these objects is integrated into a directional progression that comes to a climax between bars 16 and 22. Significantly, the piano will leave the upper register where it had been confined up until bar 16, and will make repeated incursions into the low register, giving the impression of a reversal of situation.