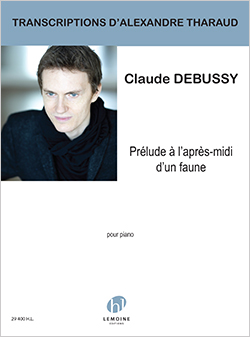 Alexandre Tharaud and dancer Chun-Wing Lam breathe new life into Debussy's Prélude à l'après-midi d'un faune (Prelude to the Afternoon of a Faun) in this breathtaking film, featuring choreography by Wun Sze Chan. A film by Raphaël Wertheimer.
Originally written as a symphonic poem, this work was transcribed by Alexandre and released for the first time within his collection Le Poète du Piano.

Following on from his arrangements of Vivaldi, French virtuoso pianist Alexandre Tharaud turns to Debussy's early orchestral masterpiece, a work which already exists in transcribe form for two pianos in an arrangement by Debussy himself, as well as in a one piano two hand transcription by Ravel. What then has Tharaud to offer the solo pianist? His transcription is extremely challenging and clearly designed with professional performances rather than amateur playing in mind. The figurations and textures are extremely intricate, detailed and striking, though there is a curious lack of detail for the feet pedalling is left to the discretion of the player. Though some of the repeated figurations may seem rather awkward at first, repeated attempts at what is written as well as time to reflect on the approach most certainly changes one's initial perspective. This is a striking arrangement of an extremely familiar work that adds a new perspective to the music. It may not be as inevitable, natural nor as idiomatic to play as the well-established two piano/piano duet arrangements by Debussy and Ravel, but it adds a touch of the circus, an element of athletic dare devilry, that is new and intriguingly persuasive.