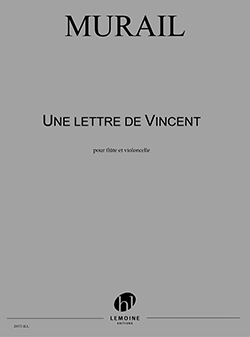 Une Lettre de Vincent, for flute and cello, is the most recent piece here (2018). It is part of the Portulan cycle, a cycle of chamber music pieces in preparation that currently consists of eight pieces written for various instrumental combinations from an ensemble of eight musicians. Portulans were old maritime atlases, often decorated with illuminations, that mapped out the coasts and indicated the principal landmarks for the medieval navigator, who at that time had no compass. Each piece in the cycle refers to an object, a place, a voyage, something read, or an aesthetic experience of particular importance for me. The starting point for Une Lettre de Vincent is a childhood memory: a book on Van Gogh that someone had given me, where in addition to reproductions of his works, were some of the letters that he wrote to Theo, his brother who regularly sent him money, canvases and paint. I had been quite moved and impressed, as much by the paintings, as by the contents of the letters, simultaneously naïve, poignant, imploring, sometimes desperate, often rather rambling, skipping from one idea to another. Much later, I found these letters again, notably in a small booklet containing the last letters that he had written from Auvers-sur-Oise during the last months of his life, and these childhood emotions came back to me. The piece begins with a short four note motive that evokes the words "Mon cher Theo", which is how all of Vincent's letters begin. This motive is transformed throughout the piece, and blends with various other elements - in particular the very rapid exchanges between the flute and the cello, resembling the hocket technique, a metaphor for the painting technique dear to Van Gogh that consisted of accumulating small dabs of paint. Today, I live in the area of Provence that Van Gogh chose to influence his colourful palette. Some evenings, the full moon rises behind the tall cypresses in the garden...