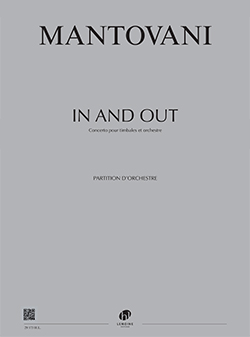 Contrary to what one might think, it is particularly difficult to write a solo or concertante work for an instrument that a person is very familiar with. Whenever I encounter this situation, I always feel a certain reserve or prudence, or even apprehension about leaning toward facility, in terms of gestures. Lack of objectivity can result in the imagination being more instrumental than purely musical. However, when Benoît Cambreling came to me proposing that I write a concerto for timpani, I did not hesitate for an instant because this instrument possesses extraordinary and often under exploited musical potential. This percussion instrument often provides a type of harmonic and rhythmic base in the orchestra, but can also assume the role of a soloist. I began by writing an etude for solo timpani making use of glissandi, rhythmic inflections, as well as the melodic potential. Once this first step was completed, I began to "orchestrate" the etude, or rather to extend the instrumental material into the orchestra by creating illusions of resonance, doublings, and echoes. Sometimes, the timpani also become a reservoir of ideas for the orchestra capable of triggering textures (as in instrumental electronic music). Here however, the instrument is above all treated in a melodic manner, reinforced, or not, by orchestral instruments that create a backdrop and the illusion of extension.