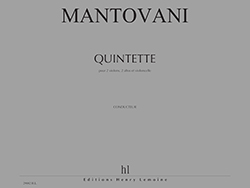 Starting in the second half of the 18th century, the string quartet emerged as composers' preferred chamber music ensemble. As a result of its homogenous sound (so to speak, because a truly balanced grouping would be made up of a violin, a viola, a piccolo cello, and a traditional cello), and due to the doubled violins giving the four-voice polyphony more transparency, the quartet has become a "standard", a reference. Writing for a string ensemble that is not a quartet therefore questions the very nature of that ensemble, and the choice of the additional instrument. The example of Schubert's Cello Quintet, is thought provoking because the supplementary instrument either serves to enrich the texture, adding a particular solemnity, or as an astounding of element of the orchestration (I am obviously thinking of the pizzicati in the piece's slow movement). Regarding quintets with two violas, Mozart, Mendelssohn, and Brahms have left us masterpieces that teach us a lot about the ensemble's overall sonority. Doubling the violas further isolates the cello, which, due to its register, becomes a sort of harmonic foundation over which is laid, either a four-part dialogue or a game of question and response pitting two of the instruments against the other two. That is why I wanted to write a string quintet uniting a viola with a traditional quartet: to experiment with the different instrumental combinations or textures, either coherent, or conflictual, and still create the illusion of an "extended quartet".
The piece begins with a long unison recitative that is gradually ornamented. Next, the texture thickens, but each of the five entities retains its individuality, all the while remaining in logical coherence in terms of the overall effect. It is at this point that internal oppositions appear (notably a dialogue between two groups each composed of a violin and a viola). This produces a shift from cohesion to counterpoint. The musical ideas seem to be determined by the evolution of the texture, itself often very continuous. In effect, at several occasions, the quintet develops according to a process of interpolation (the progressive and linear passage from a five-note chord to another five-note chord using glissandi). This quintet is thus a relatively monolithic and linear work, but it also leaves room for virtuosic solo cadenzas (reserved for the violas).
Commissioned by the Auditorium du Louvre, the Villa Medici in Rome, Wigmore Hall in London and the Luxembourg Philharmonic, this Quintet for strings is dedicated to Antoine Tamestit and the Ebène quartet.