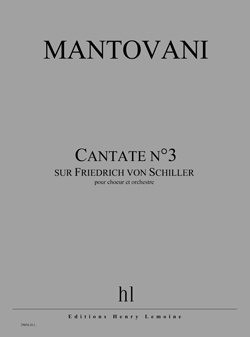 This is the second time that I have been asked to pay musical homage to Beethoven: following Riccardo Chailly's request, I incorporated the opening Bb from the Fourth Symphony into an orchestral piece written for the Leipzig Gwandhaus Orchestra. This new work uses the same instrumentation as the Ninth Symphony (with additional percussion) and quotes the opening sextuplet from the first movement of the symphony. As I had the possibility of incorporating a choir, the connection to the Ninth is also found in the poetry that will be sung: I chose various ideologically engaged texts by Schiller (poetic texts not taken from his dramatic works), which could even be considered vindictive, but that I treat in a more abstract, more contemplative manner; texts that are sometimes short, sometimes long, and use a particular prosody each time, each of which infers a different type of orchestration, infers a particular sonority. The choice of these poems can thus be considered as the first compositional act.
This work is the second part of a cantata that will be performed in its entirety at Donaueschingen (the first part also based on texts by Schiller), which follows a first cantata with texts by Rilke and a second cantata with texts by Leopardi.

Bruno Mantovani
(from an interview by C. Wasselin)