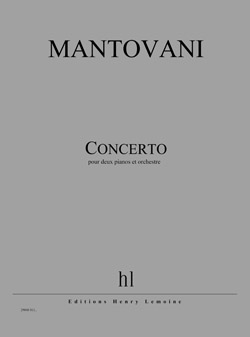 After Eclair de lune for three principal snare drums, three ensembles and electronics, and after my Concerto for two violas written for Tabea Zimmermann and Antoine Tamestit, I felt compelled to compose a new work for double soloist, and ended up choosing the piano. First of all from a desire to write for Varduhi Yeritsyan and François-Frédéric Guy, but also because the confrontation between that orchestral instrument, itself duplicated, and a symphonic mass offered me infinite sound perspective options. Though the piano writing contains nothing radically innovative, the profusion of repeated notes (using both instruments and in simultaneity) creates a percussive dynamic timbre ranging from a murmur to a violent surge. Often in echo, most of the time in simultaneity, the two soloists quite simply comprise a meta-instrument, counterpoint being rather absent from this score that favours the collision between energies over the superimposition of lines. As this 22 minute voyage progresses, several thematic elements emerge (tolling in the instrument's low register, virtuosic lines with certain notes doubled and "frozen" by the orchestra), united by an often static harmony, which imparts a sensation of continuity to this veritable rhapsody.