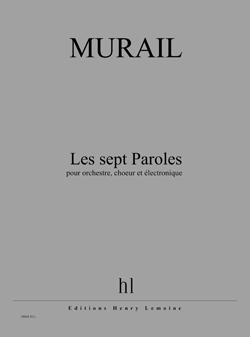 The electronic sections of this work were produced at Ircam.
Electronic Music Design: Grégory Beller

[...] (Les Sept paroles) benefits from the most recent developments in vocal synthesis. Instead of computer intervention during the concert, an extensive collection of samples elaborated by the composer and his assistant (Grégory Beller) in the Ircam studios in Paris, is used. During the concert, the audio samples are triggered from a single keyboard placed in the centre of the orchestra. In this way, the synchronisation between the acoustic and electronic music is perfect. This technique allows a virtual choir to be integrated with a real choir. This is extremely important because regardless of how talented the singers may be, they are limited in terms of register as well as intonation possibilities.
Tristan Murail explains: "at certain precise moments, the virtual choir sings in the extreme high register or the extreme low register and produces micro-intervals that supplement the diatonic pitches of the real choir. I also use effects of electronic echo and of spacialization similar to those of the Berlioz Requiem."
But the reference to romantic music stops here. The flesh and blood singers do not sing a story or convey intense emotion, except where the choral part reaches a climax in the middle of section 4. Over the work as a whole, the orchestra and the choir are perfectly united. This corresponds to the staid approach of Tristan Murail, who did not want to write an oratorio, but rather "an orchestral work with voice". For the same reason, he completely turned away from the idea of having a soloist represent Christ.
"I absolutely wanted to avoid 19th century pathos. I hope that the emotion will come from the musical form and not from the words. In order to avoid being carried away by the narrative, I wrote the notes first. It was only later that I thought about setting the text. I was thus able in my compositional process, to keep the semantic content at bay." (Tristan Murail).
The work begins with a thirteen-minute orchestral introduction that creates a setting where certain decisive musical elements can already be brought to the forefront. The actual seven last words (seven continuous sections) follow. In order to provide markers for the listener in terms of how the form unfolds, each section is indicated by the sounds of sampled bells. The texts of the work are not so much characteristic of Christ's seven last words in themselves, as of a general spiritual need relating to the human condition.
Christ's desperate words on the cross: "My God, my God, why hast thou forsaken me" (Matthew, 27-46), are taken from a Psalm in which the believer complains explicitly to the Eternal: "Oh my God, I cry by day but thou dost not answer - and by night, but find no rest." (Psalm 22-2). Tristan Murail was moved by this plea and by Nietzsche's radical interpretation many centuries later: "God is dead". His composition ends in dismay, with an extremely quiet, almost murmuring choir, repeating the line from the Psalm.
In Tristan Murail's oeuvre, the human voice plays a discrete role. There is no solo vocal music. Choral music appears only three times: in these Sept paroles, in the previous version from 1988 and in ...Amaris et dulcibus aquis... a piece for choir, synthesizer and electronics from 1994.
Does Tristan Murail hope to breach the enormous gap between singing and spectral music in the future? His spectral colleague Gérard Grisey turned to vocal music in the last years of his life with great success. Tristan Murail tells us: "the human voice is not part of any of my projects planned for the next three years. There will perhaps be other possibilities later. During the composition of the Sept paroles, I made several discoveries in this domain. I was, for example, very satisfied by the spectral choir that returns several times, and by the way in which, the vocal melody is coloured by the orchestral sound during the fifth section. The choir sings simple intervals that are perceived differently due to the spectral harmonies of the orchestra."