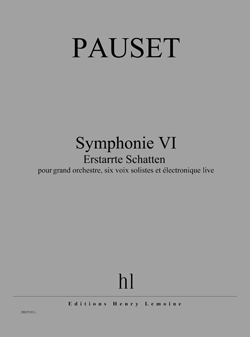 Erstarrte Schatten (Symphonie VI) for orchestra, six solo voices and electronics, completes the triptych begun with Der Geograph (Symphonie IV) for orchestra with principal piano, and Die Tänzerin (Symphonie V) for orchestra. The orchestral configuration is identical for each of the cycle's three pieces.
In each of the two earlier pieces, there was the question of making a particular music audible while confronting the dilemma of its own depiction and, as a result, the impossibilities linked to that depiction. A geographer hesitating to depict himself on the map of the world he is drawing, the difficulty of imagining the movements and evolution of a dancer amid other planetary and stellar movements, these two examples were the focus of the network of metaphors necessary for the construction of the first two pieces.
In Erstarrte Schatten, the famous image of the victim's shadows, as if photographed by the nuclear light of the Hiroshima explosion, forms the dramaturgical base of a music concerned with negativity and paradox: the lasting trace of the departed's presence, instantaneous passage into timelessness, death without mourning, without bodies, without consciousness.
The triptych itself, through its dramaturgical action, could be equated with a measured search for a situation of impossibility in the music itself: being gradually rid of metaphorical influences, and conceiving a music, though clearly based on the void, that lacks abnegation or asceticism.
The use of electronics attempts, given the preference for treating sound effect material, to propose a possible solution to the quandary of orchestral pieces with electronics, often reduced to the dialogue between an orchestral mass and pre-recorded sound materials that generally, due to their texture, have no chance of being heard in relation to the orchestra: the cultural predominance of the later being unquestionably imposed on listening.
The electronics will primarily focus on the six vocal soloists as intermittent sources, as well as on several sonic zones of the orchestra as diffuse sources (in particular the brass and strings). The sound treatment applied to these sources consists essentially of "composed" pitch-shifts (in other words, a progression of the modulation frequency and an equilibrium between the positive and negative poles constantly being renewed in the composition itself), the use of resonant filters and extremely succinct work with spatialization, as an extension of what I had developed earlier in both Perspectivae Sintagma and in Symphonie III (Anima Mundi). The spatialization engines were conceived so that the transfer envelopes, the rhythmic elements, the progressive transformation of the loud speaker sounds into intermittent sources or "spatial points", and other parameters as well, would lead to composing the spatiality in a manner at least as eloquent as the rich language of instrumental music.
Lastly, the occasional use of sound material recorded and prepared in a studio beforehand (complex hybridization, variable time-stretching, etc.) will probably be a necessary addition, but will not jeopardize the fundamental premise of maintaining a dynamic relationship, instrumental and interpretive, between the electronics, orchestra and voices.