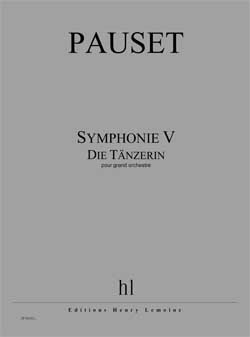 Die Tänzerin (Symphonie V), written for orchestra, is the second section of a triptych that began with Der Geograph (Symphonie IV) for orchestra with principal piano, and that will be completed next year by Erstarrte Schatten (Symphonie VI) for orchestra, six voices and electronics.
Already in play during several earlier pieces (Vita Nova (sérénades) in particular), it is the question of the impossible that constitutes the core of the project - an impossible considered not as a concrete maxim (producing impossible music generates minimal long term interest), but as a thought process leading to the construction of shattered, awkward and often insoluble musical dramaturgies, which must all the same be translated into music.
During the piece, the thought process consists of imagining the aesthetic impression produced by the movements of a female dancer on stage, seen not from the usual audience perspective, but, as with the help of some extraordinary visual apparatus, from some faraway planet. The dancer's purely choreographic movements would thus merge with the rotational movements of the planet on which she is dancing, of that planet around the sun, of the sun itself, the system surrounding it, and so on. The questions that arise concern aesthetics (on what scale does an aesthetic impression yield to the observation of phenomena), and the notion of focalisation (the dancer being the smallest element of the constructed whole and yet representing the focal point regarding the aesthetic experience).
The consecutiveness of subjects related initially to geographical topography, in Der Geograph, and later to choreography in Die Tänzerin is not haphazard. There existed in seventeenth century France, a poetic-technical literature explicitly establishing a functional and structural relationship between these two movement techniques (analytic in one case, synthetic in the other), a relationship from which I intend to draw a third designation in Erstarrte Schatten, that of matter and the lack thereof.
The music for Die Tänzerin that I derived from these reflections is of course only one solution, among others, that does not bow to any scientistic decree and avoids subjectivist discourse as well. Details constantly collide with longer developments in the context of a persuasive discussion, if the case arises, of culturally determined archetypes.
I have a natural inclination to give particular attention to details, and even to generally passed-over secondary phenomena. In dance, residual noises fascinate me as much as the geometric progressions and emotional effect of the bodies - in my music, scraping and banging come back transposed, configured and staged.
Being modern, generally does not in itself interest me: modernity is essentially an a posteriori judgment related to a moment in history, and in any case not a personal standpoint of a predicative nature. The question remains that of history, of what we inherit through various ideological filters - that, depending on who we are regardless or whether it pleases us or not, in which we participate - lastly, that to which we aspire. By nature, capitalism is the source of cumbersome overproduction. Harnessing our desires and carefully inciting new desires allows this overproduction to be transformed into what becomes indispensable new merchandise. Culture is no exception to this rule. I am well aware that my music (and the arts in general) lacks the necessary strength to resist this deadly phenomenon. On the other hand, to unflaggingly ask shrewd questions, with my own means and in the social and political context belonging to us, with regards to that situation, will satisfy my very modest desire to not be considered as a sort of "acceptable parasite".