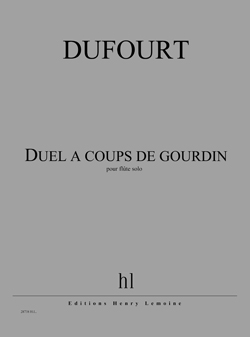 The Duel with Cudgels (Dos Forasteros) is one of the "black paintings" by Goya (1820-1823), from the Country-house of the Deaf-Man, which can be viewed at the Prado Museum in Madrid. Goya depicts two peasants battling each other with cudgels, two men already up to their knees - perhaps in quicksand and bent solely on killing each other. This pitiless battle, the face-off between two Galician cow herders in a nightmarish landscape.
This canvas, seeming to faithfully express the present time, was my inspiration for this competition piece with one of the essential elements being the "antagonistic" dimension of the conflict. The piece is based on contrasts, assembling and asserting itself as it progresses. The development reaches beyond the structure, with the articulation implying only tension. This world lacking in horizon focuses on a surging present. Time does not go by: it is only a succession of timely events devoid of interiority. The Duel with Cudgels uncovers an abrupt, irrational background, a commotion of contradictions and blows. Virtuosity is expressed by a flurry of movement, a perpetual paroxysmal shock. The new extended flute techniques are intended to appear as a primitive, muted and strident laceration over the background.