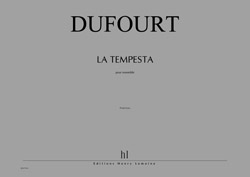 The lightning annihilates movement. Nature succumbs to narcosis. Only colour emerges from an imponderable, irrepressible mobility that erodes contours and casts them in a brownish light. The hue relates to nothing: greenish tending toward old gold, it is not of this world. It may perhaps belong to the darkest skies of metaphysics. The storm is a parenthesis: an instant of pure receptivity heralding no means of regaining control - the very brink of outrageousness. How can this materialisation of terror by impregnation and fluency be expressed through sounds? The low registers of the woodwind instruments - contrabass flute, contrabass clarinet, English horn, and trombone - are deployed at an extremely slow tempo, with weightiness and numbness. The emission is broad and allows reciprocal overlapping of the masses, in some ways an atmospheric treatment of timbre. This treatment is accentuated by the use of electronic instrumentation that establishes, in the background, a field of tensional values. The sonorities of the vibraphone, guitar or electronic organ do not spread in the space, tending rather to contract it. Wherefrom arises the paradoxical interest that could be presented by the confrontation of all of these instruments. The musical transposition is not limited to the search for a dreamlike equivalent. I wanted, a little like what Giorgione has done in terms of colour, to strip the timbre away from its subordinate or anecdotal character. The timbre stipulates its form. The disturbance of a contrabass clarinet sound column, for example, activates a whole elevatory dynamic - breath, grain, intensity, pitch - that becomes subject to a system of intense fluctuations. The simple emission of a low note by an instrument provokes a phenomenon of agogic tension. Timbre makes up a dense, oscillating, strongly polarised medium governed by an order of internal differentiation. It dilates an interior space that seems to extend itself beyond itself.