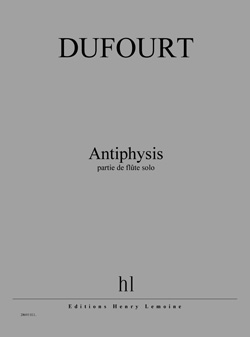 Antiphysis. The title does not allude to any Dionysian chaos. It is rather quite the contrary. Antiphysis, the rejection of naturalism in any form: ordinary senses, bursts of overwhelming force, divers weighty dramas. In the realm of Antiphysis, all is awkward, oblique, indirect, labyrinthine.
Antiphysis was written for solo flute and chamber orchestra. I desired a flute denied its pastoral vocation, a torrid flute, acrid, brimming with urban rumble. The relationship between flautist and orchestra remains deliberately ambiguous. The flute advances with breakaways, intrusions, sporadic developments. The soloist never occupies a central position.
The score is based on symmetries, both structural and functional, and all slightly warped. I tried, when implementing it, to multiply the axes, to reverse or exchange roles, to intertwine techniques to the limit of their mutual compatibility. My goal was not to control the metamorphosis, but rather to obtain "paradoxical arrangements".
Hughes Dufourt, 1978
Translated from the French by Jacqueline Rose