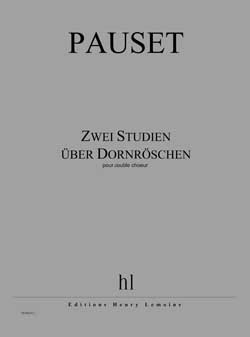 These Zwei Studien über Dornröschen (two etudes based on Sleeping Beauty) are intended to become part of a vast tableau for string quartet, two choirs and large orchestra that will last approximately one hour and be premiered in 2010.
In the context of my work on "critical exegesis" regarding the question of the stage, this project is an attempt to create music that in itself takes care of many of the forces normally at work in an operatic setting: characters, action, movement, singing, staging, set design, lighting, etc. It is not a question of inventing new metaphors, but rather of managing to transcribe the phenomena operating in the Grimm brothers' fairytale through purely musical objects and concepts.
The idea of "fragile beauty" is the sole incentive for the first piece. Beauty is a phenomenon, a feeling or an impression that is dependant on development to exist: development belonging to the evolution of that which unveils its own beauty bit by bit, or that of the initiation and growing awareness of the subject as evidenced by that very beauty. In the piece, beauty treated as musical matter, is constantly being subjected to contradictory tensions, torn between the attraction of what can be recognized as belonging to our culture (tonality for example), and a stripping down of language through what this same culture has pushed aside (noise, consonants returned to their corporeality).
The dramaturgy of these two etudes necessitated work of separating the two choirs, a separation sometimes created by tiny harmonic discrepancies between the two groups singing "almost" the same pitches, and other times materialized by agglutinations of tonal chords using pure tuning, very different from the equal temperament that our ears are (too) accustomed to.
The difficulties inherent in this sort of work on intonation made the piece almost unimaginable before Laurence Equilbey had the insight to use an e-tuner. I would like to thank her for giving me the chance to envisage this music, and further, for freeing me from other peoples' methods.
Brice Pauset
Translated from the French by Jacqueline Rose