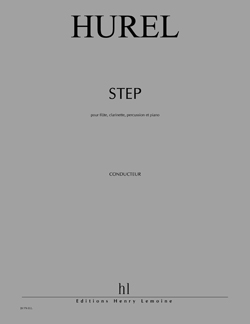 in homage to Michael Brecker

"Writing with the simplest "thematic" material as possible and reacting step by step, was the compositional objective of this piece. Furthermore, simultaneously composing D'un trait for cello, a piece based on instrumental gestures, was also decisive in the writing of Step. After a highly contrapunctal opening section where the four instruments play in imitation, a long bass clarinet solo, ornamented by an agitated flute often close to noise and by several temple block and piano sounds, evokes the incisive and gestural writing of D'un trait. Step is a sort of back and forth between free gestural writing, and constrained contrapunctal writing - the operations were calculated with the Openmusic program -, with the exception of the shared harmonic fields in which they develop, the only material uniting them is a simple minor third that slips in between the instruments and, woven into the texture, tends to ressemble a distant memory. This piece, like Cantus (2006) and D'un trait (2007), differs from my earlier pieces, first in the rhythmical realm, because pulsation is less present, and then in the instrumental domain, the instruments possessing a more emphasised individuality as regards gestures and playing modes. However, one notes the same harmonic treatment derived from spectral work and the desire for rapid colour changes, the desire for constant mobility and modulation."
Step is dedicated to the New York new music ensemble.
Philippe Hurel
Translated from the French by Jacqueline Rose